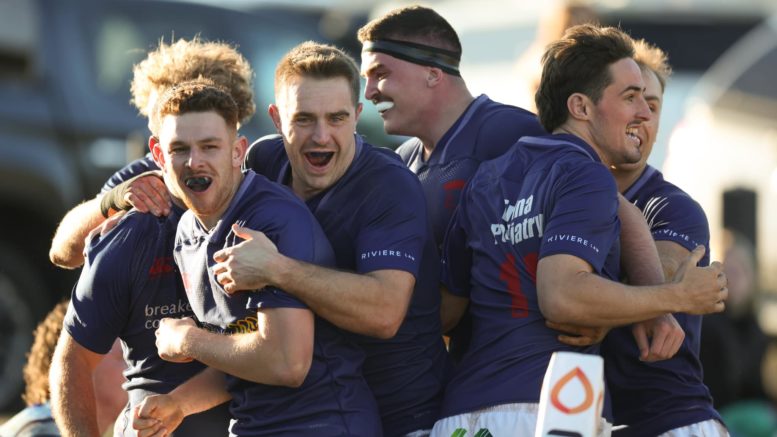 The Trojans celebrate a try at 33-5

Reigning Premiers, the Terrigal Trojans, sent a statement to other teams in the CCRU with a resounding 61-5 win over Warnervale in the match of the round at The Haven Oval on Saturday, June 4.

Warnervale got away to a great start by crossing for the opening try, but that is where it ended for them.

Terrigal quickly asserted themselves and raced out to a 33-5 lead at half time with some clinical rugby.

The trend continued into the second half with the Trojans racking up a further 28 points.

Terrigal No.8 Elekana Laupola, prop Harry Gray and flanker Sam Kenny, who crossed for 2 tries, were dominant while, for Warnervale, No.8 Matt Martin, and centres Keegan Quakawoot and Soine Piukala had solid games.

The win sees Terrigal climb to third place on the ladder on 19 points.

Down at Pennant Hills Oval, The Lakes prevailed 27-26 over Hornsby in what proved to be a neck and neck struggle for the whole 80 minutes.

The Lakes opened the scoring with a converted try, but the match was quickly evened up by Hornsby with a try of their own.

The Lakes then ground their way to a 19-7 lead only to see Hornsby claw their way back into the match with some excellent rugby to tie things up at 19-all midway through the second half.

In the latter stages of the match, The Lakes regained the lead with a try before the home side then took the lead 26-24 through a converted try.

Only in the final moments of the match were The Lakes were able to kick a penalty goal snatch victory.

At Heazlett Park, another dominant performance by Avoca Beach in defeating Gosford 69 points to 10, saw them retain top spot on the ladder with 29 points.

After a fairly even start to the match, the Avoca Beach forwards gradually took control to create lots of opportunities for their fast-running backs to capitalise.

The young Gosford team never stopped trying but had no answer in the end to a solid display of structured rugby by Avoca Beach, led impressively by fullback Mitchell Briggs, halfback Mitchell Magrath and hooker Cooper Elliott.

In the final match of the round, Kariong defeated Woy Woy at Kariong Oval by 28 points to nil to retain second place on the ladder at 26 points.

The Bay President’s Cup team had a hard-fought loss to Terrigal White, going down by 15 points to 0.

Women’s 10’s rugby continued with Terrigal confirming their Premiership favouritism by defeating Warnervale 45 points to 10, and The Lakes upsetting Hornsby 26 points to 5.