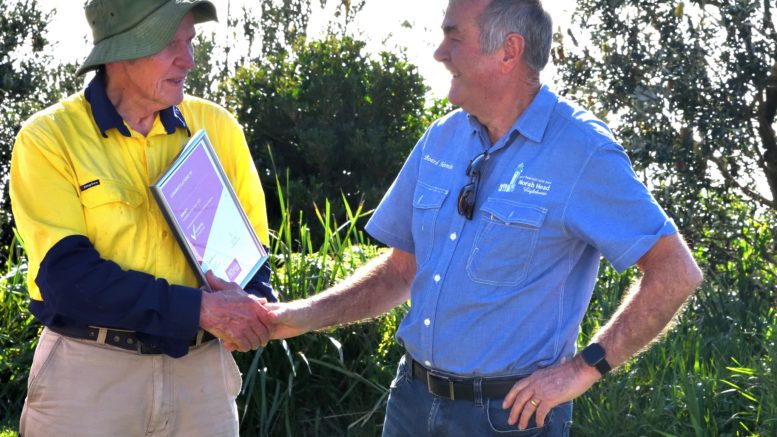 Volunteer of the year Tony Ward with supervisor Neil Rose, who nominated him

The awards, established in 2018, recognise individuals who devote their time, energy and enthusiasm to the Central Coast community.

Named Volunteer of the Year for 2022, Ward began volunteering at Wayside Chapel in the 1980s and was also active in school P&Cs for many years.

Despite suffering a stroke in 2016 which cost him his speech and the ability to read and write, he began volunteering at the Norah Head Lighthouse Reserve as soon as he was fit enough to walk.

He tackled stabilising the steep slopes on the Reserve by hammering 1m-longstakes into the slope, placing kopper logs behind the stakes and then planting out with Lomandra.

He walks 3km to the lighthouse twice a week from his home in Toukley to tend the reserve.

The awards were announced at Volunteering Central Coast’s Expo on May 25, held in honour of National Volunteer Week with the theme Better Together.

“We were very excited to once again be able to gather together and present the awards in person,” a spokesperson said.

“Our Volunteering Expo was attended by many people seeking to volunteer and who were able to meet with local organisations looking for new volunteers.

“The judges were looking for how volunteers personified VCC’s message about volunteering – ‘Helping people, changing lives.’

“We feel that the real winners are the organisations and communities in which all our nominees volunteer.”

Taking out the Living Legend Volunteer of the Year award for more than 10 years’ service with the same organisation was Keith Schnider, who was nominated by St John’s Ambulance.

He began his volunteering journey in1953 as a cadet.

Since that time he has held every role at one time or another from cadet to area manager in a volunteering commitment spanning 65 years.

He is also the recipient of an Order of Australia Medal and a commander of St. John medal.

Marine Rescue Tuggerah Lakes operates over the 80sq km of the Tuggerah lakes systems assisting boaters, recreational users of the waterways and the community including other emergency agencies and police.

The Excellence in Corporate Volunteering award was won by Peter Clarke of Kwik Kopy, Gosford, nominated by the Rotary Club of Erina.

Clarke and his staff have for many years given their time and assistance with design, artwork, and printing of flyers, brochures, and posters for major events such as the Century Challenge Cycle Ride.

Young Volunteer of the year was Samantha Laundess, nominated by LINKS Youth Service.

The Excellence in Volunteer Management award was taken out by Kylie Hogan, nominated by Coast Shelter.

Hogan has used technology to improve compliance, recruitment, onboarding, and orientation processes to make it easier for volunteers to join the organisation.

She has established strong relationships with all volunteers ensuring that they are engaged and feel part of the entire Coast Shelter team.

For more information on the Volunteering, contact Fiona Morrison from Volunteering Central Coast.