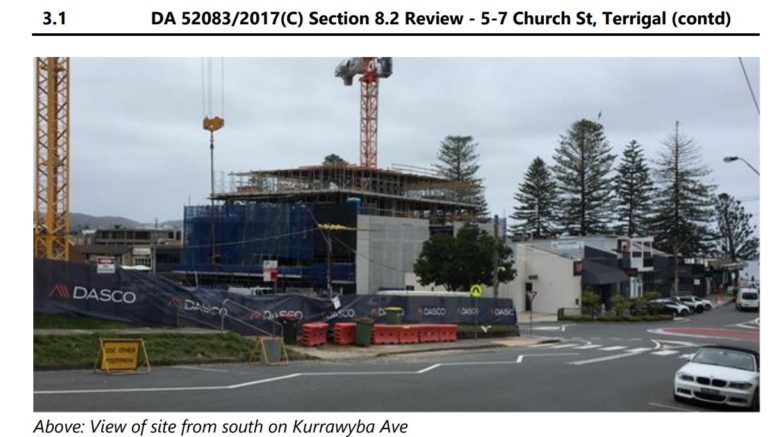 The development in Terrigal

Despite hearing from three speakers on behalf of the applicant, the Central Coast Local Planning Panel has upheld its refusal of a proposed modification on a development underway in Terrigal.

Approval was originally granted for a five-storey commercial and shop-top housing development at 5-7 Church St, with the applicant subsequently requesting an amendment which would see the addition of a sixth storey penthouse, increasing the number of residences from 12 to 13.

That amendment was refused in June last year following the receipt of 62 submissions of objection, but the applicant requested a review of the decision, refuting each of the four major reasons given by the panel for refusal, which was heard by the panel on May 26.

The panel was addressed by Michael Leavey of Michael Leavey Consulting, Doug Sneddon of Doug Sneddon Planning and John Aspinall of Urbaine Architecture as the applicant claimed the modification was substantially the same development as was originally approved.

But the panel found that the modified development proposal was not substantially the same development as the development for which consent was originally granted.

It also found the modified development proposal would result in unreasonable adverse impacts as a result of non -compliance with planning controls.

“The modified development proposal is considered unsuitable for the site as a result of non-compliance with GLEP and GDCP planning controls,” the panel found.

“The modified development proposal has not suitably responded to the concerns raised in submissions and is not in the public interest.”

The panel also said it considered there was no compelling reason in the current section 8.2 review application to support approval of the modification.

“The proposed non-compliances with the Gosford LEP 2014, SEPP65 and Gosford DCP 2013 would constitute an undesirable precedent for future development and threaten the achievement of the strategic planning objectives for the desired future character of the retail core of the Terrigal Village Centre area bounded by Kurrawyba Ave, Church St, Campbell Cres and Terrigal Esp,” it said.