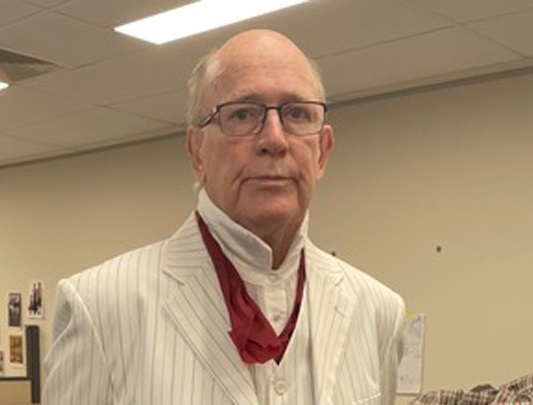 For actor David Kerslake of Niagara Park, playing multiple roles in a new production of the classic play Peer Gynt is presenting some welcome challenges.

Endangered Productions will present the Australian premiere of the original Peer Gynt from June 30 at Paddington RSL.

The production will bring Henrik Ibsen’s folkloric world to life with a troupe of singers, actors and dancers, a 30-piece orchestra and a 12-strong specialist chorus performing Edvard Grieg’s much-loved score.

Kerslake plays six characters in the production, ranging from a young man who has had his bride stolen away by Gynt to a troll and a German businessman.

But perhaps his favourite character is Button Moulder who confronts Gynt as the title character moves through a series of almost impressionistic situations to sort out his life.

“Button Moulder is not so much a character as a metaphor,” Kerslake said.

“A button moulder melts down buttons to reshape them into new ones – and in much the same way he is breaking down Peer’s soul to remould it.

“I am certainly having a lot of fun developing these very different characters – I love the challenger of finding the differences and developing each one.”

Kerslake said it will be an “amazing” production.

“I first saw Peer Gynt performed by the Old Tote in the ’70s and it ran for five hours,” he said.

“And what is exciting is that for the first time the play will be done as it was originally intended – with live music.

Ibsen wrote Peer Gynt – the story of the downfall and subsequent redemption of a Norwegian peasant anti-hero and braggart – in 1867 as an allegorical poem.

But six years later he changed his mind and asked his friend and compatriot Grieg to compose incidental music for a production of the play.

The music remains an all-time classical favourite to this day.

Katherine Munro plays the Woman in Green, Ingrid and Anitra, versatile Jack Elliot Mitchell takes on several roles including the mysterious Stranger and Alan Faulkner bring gravitas to the role of the Troll King respectively.