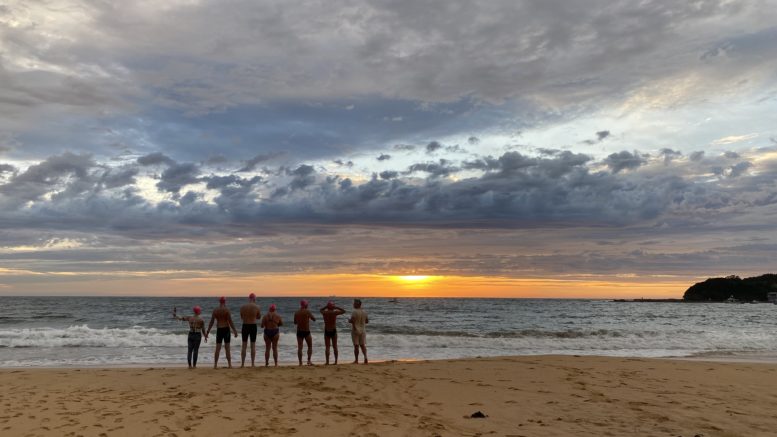 Central Coast-based ocean swimmers attempting a marathon 23km swim from Terrigal to Umina Beach have been forced to abandon the project following three failed attempts, but might try again in summer.

On April 30, six swimmers entered the water at Terrigal to tackle the ambitious course, which covers the picturesque coastline along Bouddi National Park passing Avoca, Copacabana, McMasters and Killcare, for the Bouddi Wild Swim.

The swim was organised by the Central Coast Open Water Swimming Association with swimmers from Umina Beach and Terrigal taking up the challenge.

Organiser and swimmer, Chris Young, said the first attempt was cancelled at 11.5km near Little Beach due to an un-forecast storm blowing through the course.

“Conditions quickly became very unsafe for all involved and we had no choice but to cancel the event,” Young said.

On the second attempt, two two-member relay teams completed two-thirds of the course before a strong headwind picking up in the afternoon halted proceedings.

Young said on the third attempt on May 14, he managed to complete the course in a solo swim, but a newly formed three-person relay team completed only 19km of the 23km course.

“We were going to try a fourth time last weekend, but the weather conditions weren’t good and now the water is too cold for another attempt before summer,” he said.

“It did feel wonderful to complete the solo swim.

“It felt fantastic when my feet hit the sand on the other side after 11 and a half hours in the water.

“For three years I have been thinking about this.

“I used to swim at Umina and then I moved and now swim at Terrigal.

“I thought it would be nice to join the two swim groups together but COVID-19 and the weather conspired against us.”

Young said the group did complete a successful swim around Lion Island last year and although all swimmers hadn’t managed to complete the longer swim, there was a great sense of camaraderie in the group.

“It is heartbreaking that we didn’t all complete the swim, which we had been planning since December, but we were fighting the elements,” he said.

“We might try again when the water warms up.”

COASTING – into the heart of Bouddi will chronicle the ocean swimmers’ attempt to complete the 23km marathon swim, immersing the audience in the local ocean ecology, exploring universal questions of courage, spirit, risk, connection to nature, and what it really means to be free.

“Filming this ocean odyssey has been a real privilege,” Houston said.

“Through COVID, floods, storms and personal challenges, the swimmers have kept their dream alive – an amazing testimony to human endurance.

“It has also been a powerful lens to observe the changes in Mother Nature and bigger-picture issues, like climate change and pollution.

“During their training, the swimmers experienced all these things directly and intensely.

The swimmers have been training for the swim since October, 2021, and each had to complete a 10km continuous swim to qualify.

Young said the Bouddi Wild Swim takes its name from the local Aboriginal name for the area.

“Bouddi has various meanings in Aboriginal languages, however, it’s most commonly known to mean ‘heart’,” he said.

“It’s a fitting name for the course as it takes a lot of heart to even contemplate swimming it.

“Ultimately, this is a bunch of mates attempting something fun, and a little bit crazy.”