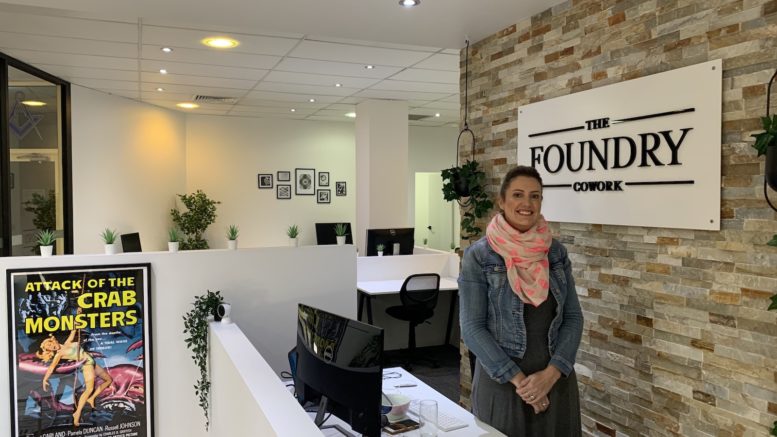 The Foundry co-working space has opened its second office in the Gosford CBD, and after only a couple of weeks, clients are moving in.

Mel Archer established her first co-working space concept after returning from New York, wanting a fun, cool space to work away from home. She opened in November 2018 at Erina, in a pre-COVID world full of optimism and normality.

Now the entrepreneur has taken the bold step to open a new office on the Central Coast, hoping to capitalise on the demand for professional workspaces that are not at the end of a freeway or the rail line.

Mel believes working parents are still wanting to be close to their families, but not necessarily inside their homes as was the case during the lockdowns.

A co-working space is often the perfect compromise between commuting to Sydney or working from your spare bedroom.

The Central Coast has a growing number of co-work hubs across the region – the Nexus Smartwork space in Nth Wyong is the oldest and most established.

Central Coast Newspapers has reported on several co-work spaces including; Studio Co at Sth Kincumber, Umina’s Common on West and Work Collective as well as KoWorks at Copacabana SLSC.

According to Ms Archer, the newest trend in corporate workspaces is to create local team spaces for employees who live a long way from the head office. Archer said “Our workspace has a series of specialist meeting rooms that suit group work and zoom style meetings” going on to say “with our full-fibre high capacity broadband connection

The Gosford office of The Foundry is not the first co-working space in the regional capital. The state government has previously supported the council’s Smart Work Hub based in the Imperial Centre for many years, but that facility was closed during the pandemic.

Mel is hoping that some of the previous users of the Smart Work Hub will find themselves at her Mann street facility.

A short video interview with Mel Archer can be found on both our website and Youtube channel. More information about The Foundry can be found at www.thefoundrycowork.com.au