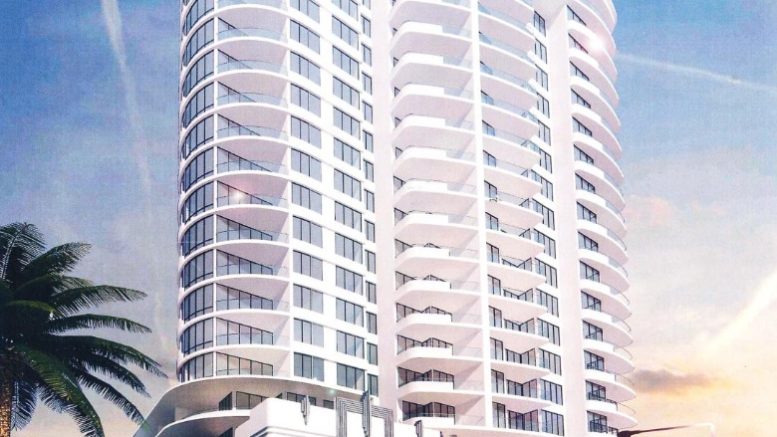 An application for modifications to a two-tower development previously approved for Creighton’s Funeral Parlour site in Gosford is under consideration by Central Coast Council, with submission invited until July 22.

The $53M Rola Property Group’s mixed-use development at 27-37 Mann St and 125 Georgiana Tce was approved by the Joint Regional Planning Panel on December 15, 2016.

The consent, signed off the following day by the Central Coast Council, was for the demolition of existing structures, retention and adaptive reuse of the Creighton’s Funeral Parlour heritage item and erection of a new retail, commercial, restaurant and residential development with 132 units and 205 car spaces.

Several modifications have been approved since.

The latest proposed modifications would see the number of residential apartments reduced from 132 to 128 providing larger apartment sizes than minimum sized apartments as defined in the Apartment Design Guide (ADG).

The proposed modified apartment mix includes a five dual key apartments as well as one, two and three-bedroom bed apartments which range in area and are generally larger than the ADG minimums.

They would also see minor modifications to the approved development’s podium and residential tower floorplates to provide better proportions, whilst substantially complying with the originally approved built form/massing, documents provided with the application said.

They also provide for a minor increase in maximum building height to meet ADG floor to ceiling height compliance and address buildability issues.

There would also be minor external and internal alterations to the Creighton Funeral Parlour and a modification of the site landscaping and swimming pool design.

Onsite parking would be increased to 217 spaces and a modified waste storage and collection point would be contained within the building basement and not in the originally approved location fronting Parlour Lane.