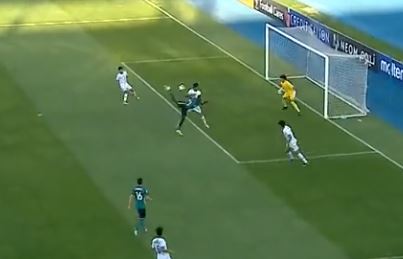 Australian green and gold have made forward strides in both the U23 and Senior teams with no small thanks to Mariners yellow and blue, late Tuesday night and early Wednesday morning, June 7 & 8 (AEST).

The Olyroos and Socceroos both won important games: the former topping Group B at the AFC U23 Asian Cup with Josh Nisbet and Jacob Farrell on the field; the latter defeating the United Arab Emirates in a do-or-die FIFA World Cup qualification with Kye Rowles in defence.

After securing his Socceroos debut in a preliminary friendly match against Jordan, won 2-1, on Wednesday June 1 (AEST), Rowles was again stationed in centre defence for the full 90′ against UAE, ending with a 2-1 win and advancement into a final World Cup qualifier against Peru, June 14 (AEST).

The breakthrough did not come until a 53rd minute goal for the Socceroos, put away by Jackson Irvine off the back of Martin Boyle’s deft escape down the wing and grounded cross in front of goal.

Only three minutes later, the celebrations blared at the other end of the pitch with an equaliser for the UAE, scored by Caio Canedo.

In the 84th minute, the winning goal was put away with a thunderous volley by Hrustic from Aaron Mooy’s cleared corner, taking a deflection before trickling into the corner of the net.

With UAE’s World Cup hopes quashed, the Socceroos will face one more obstacle from Peru, with Rowles remaining in the squad and ready for a potential third Aussie cap.

“I’m pretty stoked to get a run,” spoke Rowles after his debut against Jordan.

“Obviously it’s a massive honour and the biggest privilege ever, it was good to be out there with a great bunch of boys in a good hit out.

“Everyone in the group has shared a lot of their experiences, whether it be their first time in camp or having been here for a while, and that’s really opened my eyes to playing my game and helping the team with what I can do.

“I’ll do whatever to stay in the team, just like everyone, and there’s so much competition so you know you’ve got to be on your A game to be in with a sniff.”

Meanwhile in Uzbekistan for the U23 Asian Cup, the Olyroos began with a 2-0 win over Kuwait, followed by a 1-1 draw against Iraq and a 1-0 win over Jordan, now advancing into a quarter-final against Group B runners-up, Turkmenistan.

Alongside Nisbet and Farrell are former Mariners Lewis Miller, who was released from the Club this week, and Alou Kuol, who transferred to VfB Stuttgart in 2021.

Farrell and Miller have played a key role in securing two clean sheets, the latter earning an assist against Kuwait after a darting right flank run and a pass to Jay Rich-Baghuelou.

Kuol’s big moment came against Iraq with a ‘scorpion kick’ goal from Joshua Rawlins’ cross – a hot contender for goal of the tournament that has to be seen to be believed.

Nisbet has so far had chances as a final third substitute against Kuwait and Jordan, and will hope for more chances in the upcoming finals series – perhaps encouraged by his two-year re-signing with the Mariners confirmed on Tuesday, June 7.

“This is only half-time”, spoke Irvine after the Socceroos defeated the UAE, a statement true for both Aussie outfits who still have games to win before true glory can be experienced.

For the Mariners players in participation, the upcoming fixtures are a further chance to show-off the quality of football that has its home on the Central Coast.