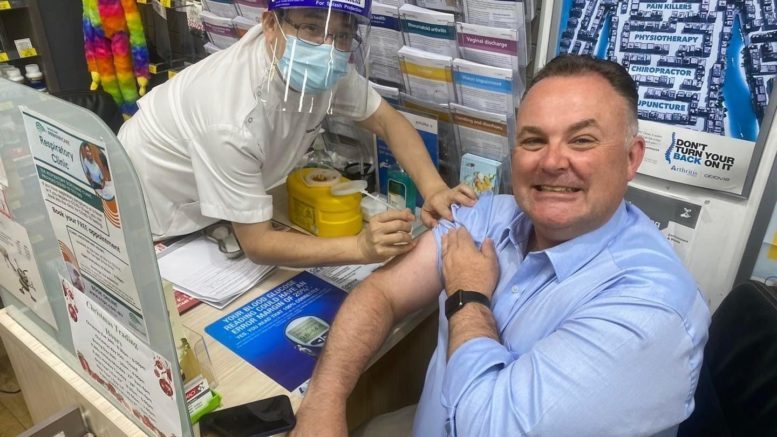 Central Coast residents have only a few days left to take advantage of free flu shots being offered until the end of June.

Central Coast Local Health District (CCLHD) is urging residents to take advantage of the shots, available at local GPs and pharmacies, before June 30.

One of the first to roll up his sleeve was Parliamentary Secretary for the Central Coast, Adam Crouch.

He said the month-long free vaccination blitz was an attempt by the NSW Government to combat this year’s expected severe influenza season.

“NSW Health has also permitted pharmacies to administer flu vaccines to children aged (from) five, reduced from 10, making it easier for families to be vaccinated together,” he said.

Crouch said it was important we all do our part in continuing to keep the community safe.

“This year’s flu season is shaping up to be a tough one so it’s important to get your vaccination as soon as possible,” he said.

CCLHD Acting Public Health Director, Paul Byleveld, said it was important for everyone aged from six months to get a flu shot as soon as possible to protect themselves and loved ones.

Byleveld said with international borders now reopened and increased social mixing, the flu season was expected to be intense.

“People have had very little exposure in the past two years due to COVID lockdowns,” he said.

“But people are starting to bring in it from overseas and we’ve seen a very early start to flu season compared to pre COVID times.

“On the Central Coast we had 1,400 cases during May and that’s approaching peak numbers in 2017, which was a very bad flu season.”

Byleveld said there was particular concern for children aged two and under, who could be especially vulnerable and have not been exposed largely to the flu previously.

“We are encouraging parents to protect their children with a vaccination, especially those aged under five,” he said.

He said while most people experienced typical flu symptoms, very serious symptoms could develop in some.

“These could include more severe breathing difficulties and pneumonia,” he said.

“We are concerned we are going to see a surge in cases.”

These include those in vulnerable groups such as people aged over 65, those of Aboriginal or Torres Strait islander heritage aged over 50, aged care workers and the immuno compromised.

“It also includes anyone aged 16 and over with a chronic or severe health condition.” he said.

He said the fourth booster could be administered four months after the third and could be given at the same time as a flu vaccination.

“We are aware of rare cases where people can get the flu and COVID at the same time and could be quite unwell,” he said.

“If you do develop flu symptoms, talk to your doctor as soon as possible – some medications can be effective.”

Free flu shots can be organised through your GP or pharmacy until the end of June.