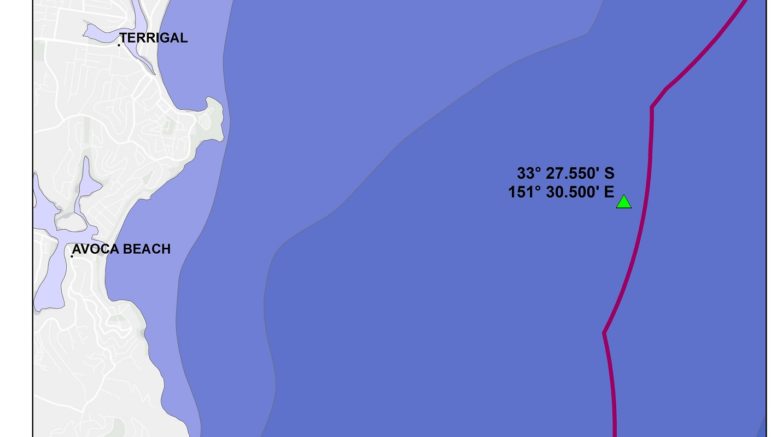 A map from the DPI website showing the proposed location

The establishment of a reef in the region was announced on June 6, with the State Government saying at the time a site had yet to be decided.

Related article: A new artificial reef for the Central Coast

But the Department of Primary Industries (DPI) website outlines a preferred site off Terrigal with submissions invited until July 5.

The website says the site under consideration is a sandy area approximately 6 km east-south-east of Terrigal Haven.

MPs Liesl Tesch (Gosford), David Mehan (The Entrance), David Harris (Wyong) and Yasmin Catley (Swansea) say they consulted with local community members about their preferred location of the reef via a survey with the top two responses being Shelly Beach and Catherine Hill Bay.

They say despite these efforts, the Government is looking at the Liberal Party held seat of Terrigal.

They say this follows: 96 per cent of funding from the Stronger Communities Fund going to Coalition and marginal seats; Blue Plaques being granted to heritage sites in exclusively Coalition electorates, despite 763 nominations from Labor held seats; and no NSW Government bushfire recovery funds being awarded to the Central Coast.

Harris has called on the Government to release scientific data validating the choice of the Terrigal site for the reef.

“Transparency in decision making would give Coast residents confidence this was the best decision,” he said.

Catley said the Government has “ignored the views of Coasties”.

Mehan said he was disappointed the Government has not taken into account the community’s wishes when making the decision.

Tesch said it was time that integrity was restored to processes in NSW.

Crouch said it was “disappointing, but not surprising” for Labor MPs to criticise the announcement, despite the fact it will benefit the Central Coast’s recreational fishing sector for years to come.

“A proposed location for the new reef has been determined based on preliminary consultation with the local recreational fishing sector; however, this is contingent on further stakeholder consultation in the area and more detailed mapping work,” he said.

“No site has been locked in yet.

“A total of nine reefs funded from the recreational fishing trust have been deployed to date including one off Swansea in August, 2019.”

Crouch said funding delivered to Labor held seats since he was appointed Parliamentary Secretary for the Central Coast include: $10M for the multi award-winning Leagues Club Park; $2M for Central Coast Conservatorium of Music; $200,000 for Gosford Musical Society for upgrades and new equipment; and $18M towards the construction of a new university in the heart of Gosford.

“Additional to this, there has been over $13.5M delivered to the Central Coast through the Stronger Countries Community Fund supporting projects like the outdoor water park at Peninsula Leisure Centre, the new Norah Head Community Space, the brand-new club house and amenities at Adelaide Street Oval and the popular play space at Sun Valley Park,” he said.

“The Bushfire Local Economic Recovery package (BLER) is aimed at supporting social and economic recovery in regional communities most affected by the 2019/20 bushfires.

“Funding through this went to areas of the most need.

“In addition to this the Gosford electorate alone received over $3.5M for the Mangrove Creek Dam Visitor Centre and funding to support Bara Barang’s Dream Builders on Country project.”