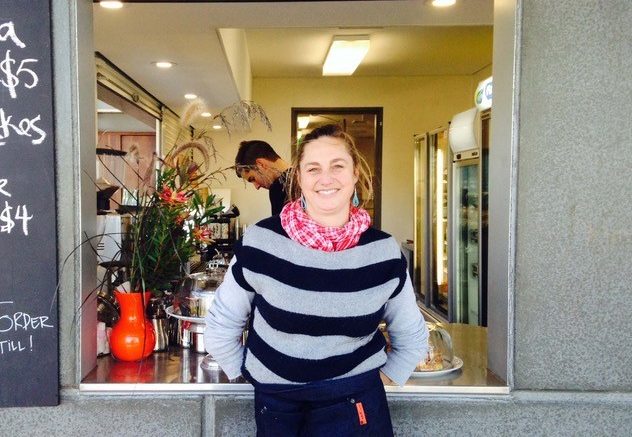 Gabby Greyem at the kiosk

The owner of Jasmine Greens Park Kiosk in the Peninsula Recreation Precinct is calling for more security measures at the park following repeated acts of vandalism.

Gabby Greyem said the latest incident occurred last week, when vandals smashed the glass windows at the front of the kiosk, but this was only the latest in a string of attacks over the past few years.

“Our shop windows got smashed between 8 and 9pm on Sunday night, June 5,” Greyem said.

“Someone called the police and they rang us; this has happened five times since October.

“Police are on high alert and it’s great they responded so quickly and met us at the scene but every time this happens there is around $15,000 in damages.”

Greyem, who rents the building from Central Coast Council, said roller shutters placed inside the glass windows often prevented break-ins to the actual kiosk, but the windows were an easy target.

She suspects the perpetrators are teenagers, who carry out anti-social behaviours in the precinct at night.

Reluctant to claim incidences of vandalism on her insurance in case it impacts on retaining a policy in the light of repeated claims, Greyem has been footing the bill for damages herself.

“We’re not replacing the widows at this stage and that makes trading very difficult – especially for our staff in winter,” she said.

“Those glass windows are there to protect our stock and as climate control for our staff.”

Greyem, who has run the kiosk for eight years, said the glass had been installed in 2017 and had been smashed nine times since then.

“Altogether we have had 70 break-ins,” she said.

“Sometimes they do get through the shutter doors and we have had coffee grinders stolen and driven over, tills stolen multiple times, incidences of arson and graffiti and loss of stock.

“They mostly go for lollies, ice cream and beer.”

Greyem blames the situation on a lack of security in the precinct and a shortage of activities for youth on the Peninsula.

She has been liaising with police and local high schools and is set to meet with Council Administrator, Rik Hart, this week.

“This anti-social behaviour has escalated since COVID lockdowns and we are the victim every time,” she said.

“The depraved behaviour after dark is very concerning,” she said.

“The public toilets (in the park) are often vandalised as well; the cost to the public of repairing damaged facilities is very high.”

Greyem is calling for fencing and security patrols throughout the precinct at night, including night lighting.

She would also like to see a security fence installed around the kiosk and the repair of CCTV cameras in the precinct which are not working.

“I have more than 2,500 signatures on a petition calling for more security,” she said.

The kiosk, which used to operate as a restaurant at night, has ceased night-time trading for the safety of customers and staff.

“I am not trying to scare the community away from the park, I would just like Council and the State Government to act on the need for increased police resources and youth facilities on the Peninsula,” she said.

“We need a building where kids can go at night and on weekends and school activities with qualified people who can help them through their difficulties.

“If we don’t provide confidential highly skilled services for our youth we get a ghetto effect.”

A Council spokesperson confirmed that a meeting has been arranged with Greyem to discuss a number of her concerns but declined to comment further.