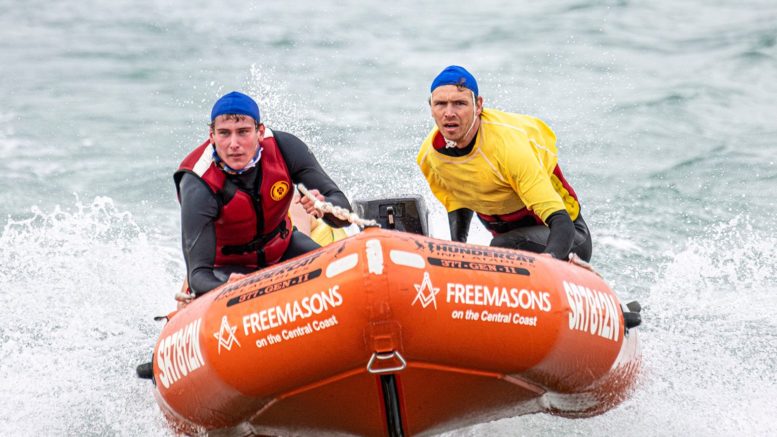 The Terrigal team competing in Round 3 of the competition

The final of the Sharkskin NSW Inflatable Rescue Boat (IRB) Premiership will be settled at Ocean Beach this weekend, June 25-26, as Kiama Downs and Caves Beach battle it out for the top gong and Terrigal tries to hang on for third place on the podium.

Kiama Downs and Caves Beach have been almost inseparable since the opening round of the premiership with only two points separating them on the points score as they go into the final.

Kiama Downs is sitting on 28 points, with Caves Brach just behind on 26.

Terrigal, on 15 points, will be working hard to hold onto the third spot, with Newport just behind on 13 and Thirroul and South Maroubra both on 10.

Caves Beach Team Manager, Scott Bryant, said the team had entered the premiership 19 times and had only finished outside the top three once.

“We know that for any team to beat Kiama Downs they’ll have to be at their best, and we will be there this weekend chomping at their heels and pushing them to their limits,” he said.

“A successful weekend for us is winning the round, that’s what we’d like to do.”

Kiama Downs has taken out two of the previous here rounds, with the most recent win, on the Far South Coast over the June long weekend, coming by the tightest margin of the premiership so far.

“We know it won’t be easy – everybody wants to win it and we’re no different,” Team Manager, Stephen Strong, said.

“It’s important that we’re keeping everyone focussed on what their job is, taking it one race at a time, not getting ahead of ourselves, and let the racing do the talking, as it is.

“Hopefully we can take it out this weekend and celebrate in style.”

Ocean Beach traditionally presents different challenges for racing to other beaches, and both teams will have to navigate that if they’re to be named champion on Sunday.

“The forecast is quite good, weather is quite mild, not a lot of wind and quite a small surf, so it will come down to the tides and beach conditions as to what the sands like,” Strong said.

“It’s a beach where a lot of work needs to be done on the sand.

“We will race with whatever Mother Nature dishes up, but it’s going to be hard work.”

The three previous rounds of the premiership were held at Terrigal, Bulli and Broulee.

A stand-alone NSW Championships event will be held at South West Rocks on July 8-10 – with all teams in the running to win.