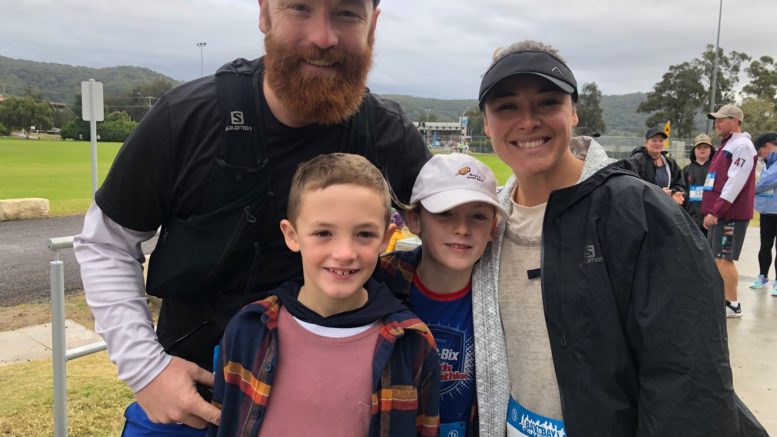 Gates and his family

Green Point father of two, Callan Gates, set off on June 2 on a 250km run in support of people living with blood cancer.

The 250 Reasons run from Newcastle to Sydney along the Great North Walk will see Gates climb more than 10,000km in vertical gain (the equivalent of climbing Mt Everest) (GNW) in memory of his wife Tara’s mum.

The run is likely to take more than 60m hours and Gates will cover it in one single run with barely a rest break.

Gates said Tara’s mother passed away from acute myeloid leukaemia when Tara was just three and the family has also had friends impacted by blood cancer and seen the devastation it causes.

Nine years ago, Tara raised over $9,000 by shaving her head as part of the Leukaemia Foundation’s World’s Greatest Shave campaign which inspired Gates to fundraise.

“To say I was inspired by Tara’s participation in World’s Greatest Shave is an understatement,” he said.

“Hair can represent so much for a woman, so to see her do this was an amazing thing to witness – so I thought about what I could do in order to contribute.

“I like ultra-trail running … I have done a few ultras before.

“I’m not particularly good at them but I love them none the less.

“This run will test me, make me uncomfortable, will make me cry and will leave me in significant pain.

“However, none of that even comes close to the pain that people with blood cancer deal with on a daily basis.”

Gates’s goal was to raise $25,000 for the Leukaemia Foundation and people living with blood cancer, which equates to $100 per km of the GNW trail.

Donate to Gates’s fundraising efforts at https://fundraise.leukaemia.org.au/fundraisers/250reasons/250-reasons.  To see Callan in action on a past run, please see YouTube video here: https://youtu.be/thhVecyRZWk.