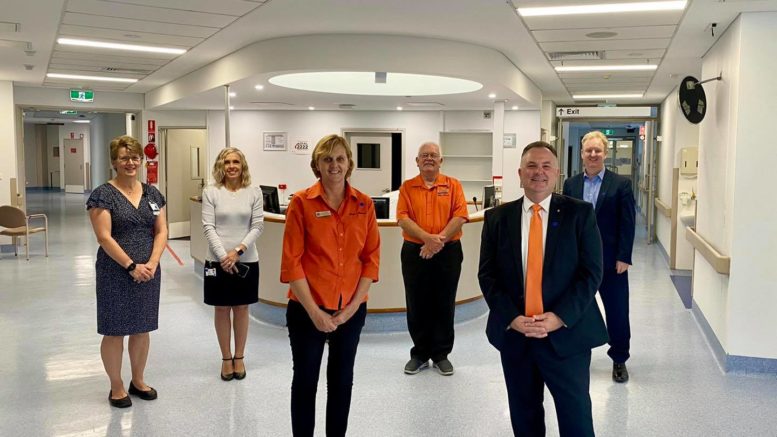 A petition has started to campaign for a palliative care unit at Wyong Hospital – and a share in the $743M recently announced by the NSW Government for palliative care support services.

Following the opening of Elsie’s Retreat palliative care unit at Gosford Hospital in April 2021, the project’s “Orange Army” is now setting its sights on opening a second unit on the Central Coast.

Committee member of Elsie’s Retreat Project, Margaret Pearce, said there was a definite need for a second palliative care unit because of the rapid growth in the north and that the Gosford unit was always full with a waiting list.

“It’s a perfect opportunity now that the new section of Wyong Hospital is open and there could be some space in the old section.

“So let’s get moving,” Pearce said.

Elsie’s Retreat is one of the ongoing projects of the Lions of Wyoming/ East Gosford Centennial which put up $450,000 to furnish the Gosford unit and will do the same for the Wyong unit.

“What we do need is for the government to agree to pay for specialist nursing and doctor wages, like they did for the Gosford Elsie’s, and we need fully trained staff,” Pearce said.

The Elsie’s committee and Lions Club has a scholarship fund available for Registered Nurses interested in training in palliative care.

“So now we are calling on community support to gather 10,000 signatures on our petitions before we can present our campaign to Parliament,” Pearce said.

Parliamentary Secretary for Central Coast and Terrigal MP, Adam Crouch, has started an online petition which he will present to Minister for Regional Health, Bronnie Taylor when she is expected to visit Elsie’s Retreat in September.

“It is an honour to support the Elsie’s Retreat committee in lobbying the Minister for a dedicated palliative care unit at Wyong Hospital,” he said.

“We can’t do it alone; we need help from the community to show their support by signing the petition.

“There could be no more important investment for a government than in quality of life and in ensuring dignity and care for those approaching the end of their life.

“This is an investment in quality of life, in dignity – the dignity of our loved ones, and everyone in our region,” Crouch said.

More than 12 years ago, members from the Lions Club of Wyoming/East Gosford Centennial joined forces to create the Elsie’s Retreat project which aimed to make good on a promise Oana McBride made to close friend and neighbour Elsie, who passed away from breast cancer while in a nursing home.

Since then the hardworking Elsie’s Retreat committee, Judy Maudsley, Margaret Pearce, Oana McBride, Peter Hurley, and the rest of the Orange Army have worked tirelessly to improve palliative care options on the Central Coast.

Their dream became a reality in April 2021 when a 10‑bed palliative care unit at Gosford Hospital was officially opened.

The unit can expand to 14 beds and includes sofa beds in patient rooms for family members/carers to use; two large family rooms; a lounge area with kitchenette and lounges; a children’s area with toys; and an outdoor deck with automatic all-weather cover.

It has already provided a sanctuary for hundreds of people, with a high level of care that could not be provided at home for patients who benefit from a caring team in homely comforts.

The unit is staffed by a 20‑strong team within the Gosford Hospital campus so that patients have access to specialist medical, nursing, and allied health services.

Pearce said the Wyong Hospital palliative care unit would be modelled on the successful Gosford unit.

To sign the petition for a palliative care unit at Wyong Hospital, go to the Elsie’s Retreat Project Facebook page or go to adamcroupmp.com.au/palliative_care_unit_for_wyong_hospital

1 Comment on "Campaign for palliative care unit at Wyong Hospital"