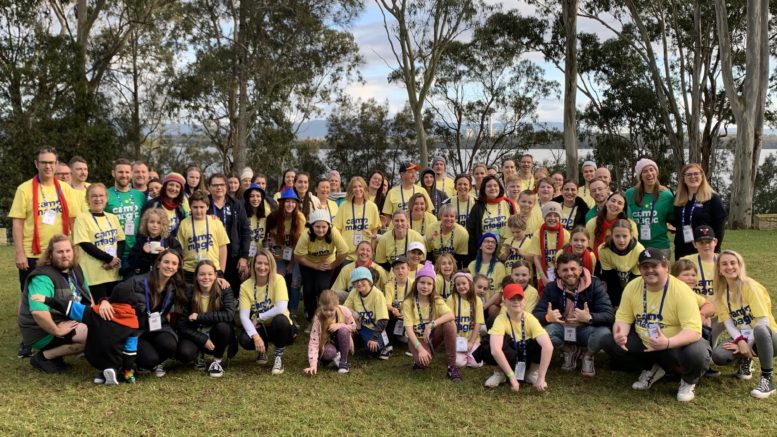 About 45 children gathered at Lake Macquarie on June 17-19 for the first-ever Camp Magic in the Central Coast/Hunter region for the Feel the Magic charity.

Feel the Magic is dedicated to supporting children aged between seven and 17 who are dealing with the loss of a parent or sibling.

It gained national attention this week with TV presenter Darren McMullen raising more than $500,000 for the charity as the runner-up of Celebrity Apprentice.

“They’re the only charity in Australia that looks after grieving children, and one in 20 kids have lost a parent,” he said.

“With so many people watching the show, it’s a lot of exposure for people that didn’t know this was out there and an option for their kids.”

Feel the Magic CEO, Adam Blatch, said this month’s camp was the first of many planned for the Central Coast area.

“This is the start of a broader plan for Feel the Magic.

“We know what we offer in support for kids and families living with the death of parent, guardian or sibling is a vital part of helping these kids live healthily with their grief.

“We are looking forward to being a permanent charity in the region,” he said.

“Thanks to a $55,000 grant from Newcastle Permanent Charitable Foundation, we are also holding our first regional Grad Camp on Lake Macquarie in March of 2023.

“At this camp, we will prepare 17 and 18-year-olds who have experienced the loss of a parent or sibling build the strategies they need to live healthily with their grief through some of the milestones and challenges of transitioning to adult life – all without the need to travel to Sydney.

“By holding these events here, we help keep families closer and build a community of support in the region,” Blatch said.

Josh Levin, one of the mentors at this month’s Camp, is also excited about the possibilities presented by holding their camps in more locations.

He has come full circle, having been at Camp Magic when he was 13 after losing his father.

“The camp I went to was in Sydney. Being here on the Coast, it’s more accessible for children and young people to access that grief counselling without having to travel too far,” he said.

“I was just starting high school when Dad passed away and I didn’t know a single other young person in the same position as I was. But everyone at my camp was from Sydney and while we’re friends on Instagram, it’s not the same as catching up in person.

“Having people in the same area means you can stay in touch a lot easier down the track,” Levin said.

Some of the children at the Camp last weekend hailed from Berkeley Vale, Gosford, Green Point, Kariong, Kincumber and Narara.

Newcastle Permanent is a solid supporter of Feel the Magic and apart from eight employees volunteering for mentoring roles at the Camp, the organisation donated $15,000 through its CommunityAssist Employee Donation Program which enables 15 children to attend Camp Magic at no cost to their families.

Also, there is a $55,000 grant from the Newcastle Permanent Charitable Foundation for the Hunter-based Grad Camp for adolescents in March 2023.has