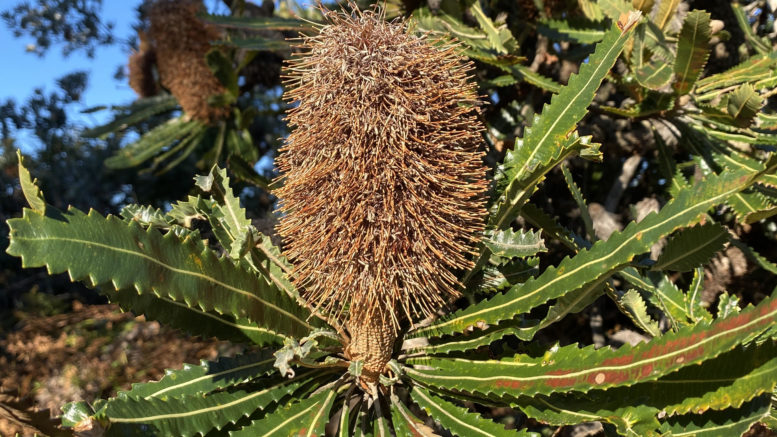 The Council is dedicated to the control and eradication of invasive plants and animals and each year presents the Froggatt Awards for major contributions to environmental protection.

Budgewoi Beach Dune Care (BBDC) has received a special commendation in the Control and Eradication category, “in recognition of decades of carefully planned and well implemented weed eradication and sand dune restoration along the high-energy Budgewoi coastline”.

Prior to 1995 Budgewoi Beach sand dunes were mined for rutile.

BBDC team member, Neil Bevege, said that when this activity finished, the mining company planted bitou bush, an invasive South African weed, to revegetate the disturbed dunes and then abandoned the area to do its own thing.

“As a consequence, more invasive species including lantana, asparagus fern and fleabane became established in the dunes, creating a degraded, weed infested wasteland that did nothing to support the native environment, nor protect the dunes from erosion,” he said.

Since its inception, this small group of volunteers have transformed 32ha along 3kms of Budgewoi coastline into a balanced coastal ecosystem.

Bevege said this broke the bitou bush cycle and allowed BBDC to rehabilitate the dunes with local provenance tube stock which was propagated by the group from native plant species that had survived in the area.

“Restoration techniques, including the use of fire, has made the rehabilitated Budgewoi dunes a demonstration site for the eradication of invasive species and the benefits of planting endemic native species,” he said.

By the end of 2000 BBDC had built fenced beach accessways and boardwalks to viewing platforms at the end of four streets.

These protect the dunes and adjoining vegetation, by keeping pedestrians off foredune areas when accessing the beach.

With new native plantings established in the dunes the BBDC volunteers engaged in follow-up hand weeding of re-emerging weed species while preparing to repeat the rehabilitation process in the remaining areas.

Rehabilitating and extending the site’s ephemeral wetlands and littoral rainforests (EEC) continues to play a large part in protecting the native fauna, expanding biodiversity and reducing the opportunity for invasive species to re-establish.

Critical to the success of this 27-year project has been BBDC’s commitment to the continued maintenance of its area.

“This includes repetition hand weeding of the dunes, bagging and removal of any weed material that may regenerate if left where it was removed,” Bevege said.

“Where appropriate, weeds are composted at BBDC’s compound while other non-compostable materials are bagged and collected by Central Coast Council for disposal.

“As with all successful enterprises, nothing happens without a vision, a plan and effective leadership.

“From the beginning and continuing, Budgewoi Beach Dune Care has been ably led by Phil Heaton, and his leadership and dedication was recognised last year with Phil being awarded the Order of Australia (OAM),” Bevege said.

Budgewoi Beach Dune Care volunteer team meets weekly on Tuesday mornings from 8 am, at their compound next to the Budgewoi Holiday Park in Mimosa Rd.

New volunteers are very welcome and can contact team member Neil Bevege on 0427 022 168.