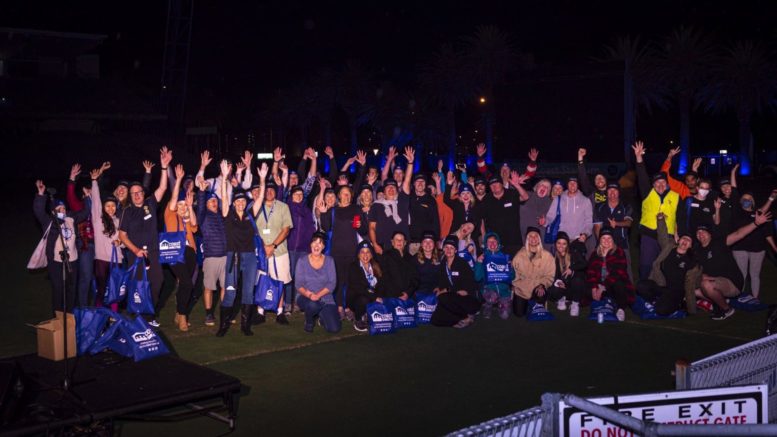 If you knew that giving up your bed for just one night would provide safe accommodation for someone experiencing homelessness or domestic and family violence, would you do it?

That’s what Coast Shelter is asking the Central Coast community to do at its 30th anniversary Sleepout at Central Coast Stadium on Friday, August 5.

Sleeping rough for one night is part of it; raising awareness and funds is the main aim.

With last year’s event raising $88,500, Coast Shelter is asking businesspeople, community groups and individuals to get involved and register online at www.coastsheltersleepout.com.au.

Everyone aged over 18 is encouraged to register and ask friends, colleagues, and family to sponsor them.

To be eligible to join in the Sleepout you will need to raise at minimum of $1,000.

“For our Sleepers, it will be cold and uncomfortable, but it will give a small insight into what it’s like to sleep rough,” a Coast Shelter spokesperson said.

“Homelessness comes in many forms such as people experiencing domestic and family violence and having to leave their home, young people couch surfing because the family home isn’t safe, or those experiencing mental health concerns.”

Central Coast Leagues Club is the Major Sponsor of the Sleepout with Mars Food Australia sponsoring dinner for participants.

Both businesses will have a large cohort of their team there on the night and they encourage other Central Coast businesses, community leaders and individuals to get involved.

“I felt that sponsoring and participating in the Sleepout is not only a great way to continue supporting Coast Shelter but also help raise the awareness of the rise in homelessness and people fleeing domestic and family violence right here on the Central Coast,” he said.

“Waking up in the early hours of the morning after a rough night’s sleep in the elements, I felt a new sense of empathy towards the people whose daily life is burdened by this routine,” she said of last year’s event.

“I look forward to seeing the progress Coast Shelter makes towards homelessness on the Central Coast and hope to further my knowledge of it so I can share it with those around me.”

“We know domestic and family violence is one of the main contributing factors for people who find themselves homeless,” he said.

“I ask the community to step out of its comfort zone and get involved in this year’s 30th anniversary Sleepout event.

“It’s an experience not to be missed and will help us raise awareness and funds to address homelessness right here on the Central Coast.”

If you would like to get involved, register online at www.coastsheltersleepout.com.au.