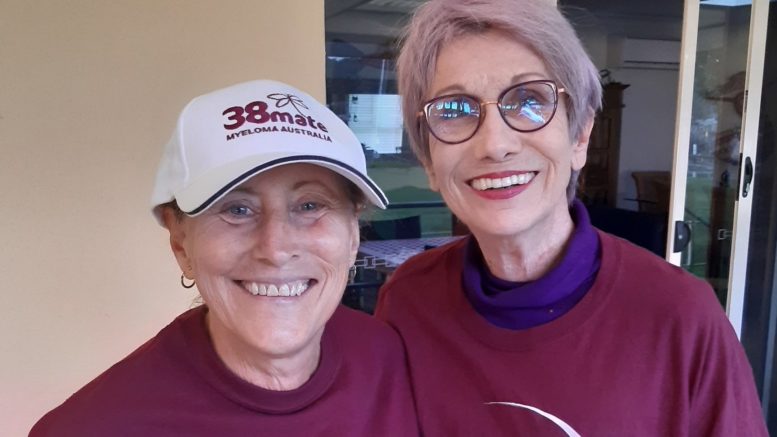 When Wendy Ball of Davistown hurt her back at work nine years ago, she didn’t think much of it.

But the persistent injury didn’t get better and, after seeing a Workcover doctor, Ball went to her own GP who sent her for various scans.

That night she was in hospital with a diagnosis of myeloma.

“I was very healthy and well before that and didn’t really know much about the disease before my diagnosis at the age of 50,” she said.

“But I became very unwell and developed clots. In 2014 I had a stem cell transplant, which was very successful, and I was on medication for a while.

“At the moment I am not on mediation and leading a very healthy life.”

The disability worker, who transports special needs children to school and works as a teacher’s aide, is keen to raise awareness of the disease and has organised a walk in Gosford on May 29 as part of Myeloma Australia’s “3.8 With a Mate” fundraiser.

“The disease is not curable but it is treatable,” she said.

“All money raised through 3.8 with a Mate will go towards research, which is going ahead in leaps and bounds as different drugs are being discovered.

“The 3.8 represents the 38 people per week who are diagnosed nationally.”

Walkers will meet near Gosford Sailing Club at 9am on May 29, and walk along the waterfront to the Brian McGowan Bridge and back.

“It will also be a chance to grab a cup of tea of coffee at the Eat Streets Café and have a catch-up,” Ball said.

“The walk is as much to raise awareness as to raise funds.”

Ball has been walking 3.8km each day to warm up and raise early funds.

“Others have raised money in various ways. One of the girls is selling candles and will sell them on the day of the walk,” she said.

Register to walk, or help fundraise by buying a Team Myeloma T-shirt or cap, at https://app.etapestry.com/cart/myelomafoundation/default/category.php?ref=1656.0.514988225.