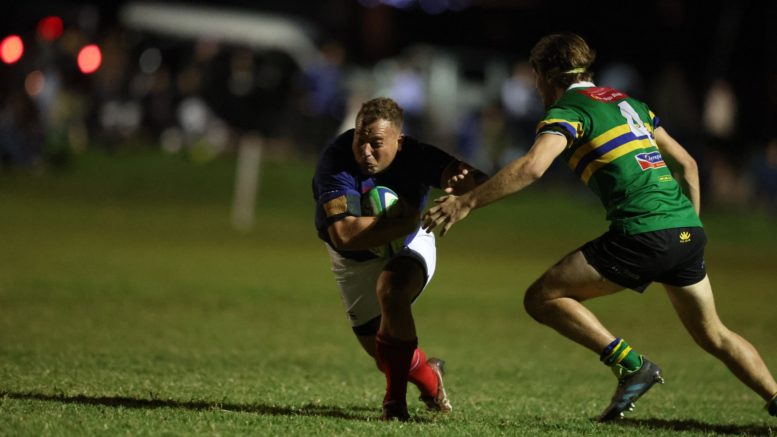 Terrigal held on to defeat Avoca Beach 22-18 in the Central Coast Rugby Union match of the day at The Haven on May 7.

The evening match was played before a huge crowd, with Terrigal opening the scoring early with a try to take a 5-0 lead, and several penalty goals seeing a half-time score of 14-6 to Terrigal. Terrigal crossed for a second try and posted another penalty goal early in the second half to lead 22-6, before Avoca pulled out the stops with two tries.

Terrigal hung on to record the victory with centre Harry Hughes, flanker Sam Kenny, lock Macklin Collins and prop Harry Gray standing out. Best for Avoca Beach were centre Mitch Jacob, in his 100th first-grade match for the club, hooker Cooper Elliott and No.8 Fionn Henderson-Foley.

The match between The Lakes and Warnervale was hard-fought from start to finish but Warnervale proved too strong on the day and chalked up a 36-26 victory.

The match was moved to Woongarrah Oval because of the damp conditions at Slade Park, costing The Lakes home ground advantage.

Each team crossed for a first-half try with Warnervale going into the break with a 15-12 lead. Warnervale extended their lead to 22-12 early in the second half, before The Lakes hit back to make the score 22- 19.

A late surge saw Warnervale emerge victorious despite a late try from The Lakes.

The win takes Warnervale top of the ladder.

The Lakes was best served by prop Tim Poese, who crossed for two tries, and hooker Ben Kaifa.

The Razorbacks hit some good form to defeat Hornsby at Pennant Hills Oval No.1 by 31-19. The Razorbacks got away to a great start, jumping to a 14-0 lead. Hornsby hit back to square the scores by halftime, but the Razorbacks dominated the second half and took the win despite a late Hornsby try.

Halfback Jarrod Grange and locks James Mann and Josefa Biu were best for the Razorbacks. Hornsby was best-served by five-eight Hunter Bird and flanker Epeli Kauvka.

Woy Woy opened the scoring early but Gosford responded when a brilliant 70m dash by five-eight Ben Shelley made it 7-7 at halftime.

Gosford crossed for a further three tries in the second half to secure the victory.

Warnervale lead the Premier 1 table on 10, with The Lakes, Avoca Beach, Terrigal and the Razorbacks all on nine.

Kariong sits on six, with Hornsby and Gosford on five and Woy Woy yet to score.

The Bay President’s Cup team had the bye.

Women’s 10s rugby continued with wins for Hornsby, Terrigal and The Lakes.

This Saturday’s Premier 1 round sees Kariong take on the Razorbacks at Kariong Oval, Terrigal travel to Pennant Hills to take on Hornsby, Gosford host Warnervale at Gosford Showground and Avoca Beach clash with Woy Woy at Heazlett Park.

The Bay Rugby Club will take on The Lakes at Joseph Banks Oval in the President’s Cup clash.

The Central Coast Women’s 10s competition will see Terrigal take on Hornsby and the combined Kariong/Razorbacks team playing The Lakes at Kariong Oval.