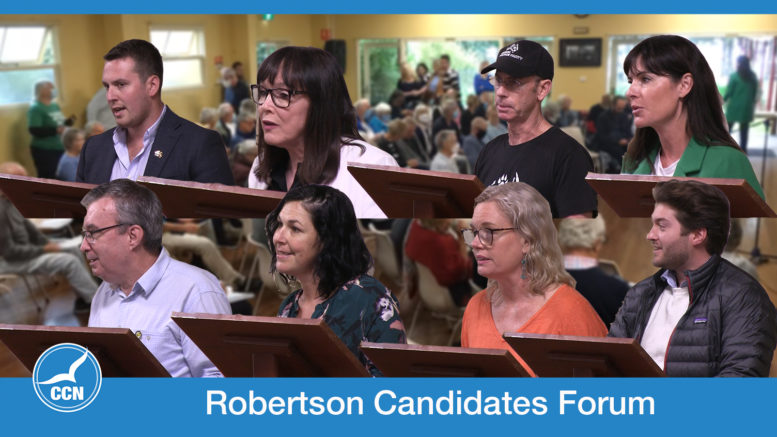 Eight of the 11 candidates for the seat of Robertson attended a public forum and Q&A session on Saturday, April 30. CCN was there to record proceedings; they are presented below in the order of the day.

Barbara-Jane Murray of the United Australia Party’s primary focus was on Australia’s response to the COVID pandemic: her policies are to stop mandates, provide early treatment, allow doctors to provide treatment free from bureaucracy and prevent vaccine passports.

In line with what he described as his party’s values of kindness, equality, rationality and non-violence, Animal Justice Party candidate Patrick Murphy addressed voter disillusionment with the two major parties, supporting a federal ICAC and the banning of live animal export.

Liberal Member for Robertson Lucy Wicks, who is defending the seat, highlighted accomplishments attributed to the Coalition Government since 2019, including surviving the COVID pandemic, securing the economy, lowering unemployment and, locally, completing and beginning new infrastructure developments and stopping Pep-11.

The Liberal Democratic Party’s Bentley Logan said he prioritised individual freedoms against COVID alarmism and mandates. He advocated cutting the budget of every government department excluding Defence, making income tax-free up to $40,000 a year, an energy focus on coal and nuclear while abandoning net zero-emission and renewable energy targets, defunding the ABC and SBS, and minimising regulation in business.

The other four Robertson candidates did not attend.