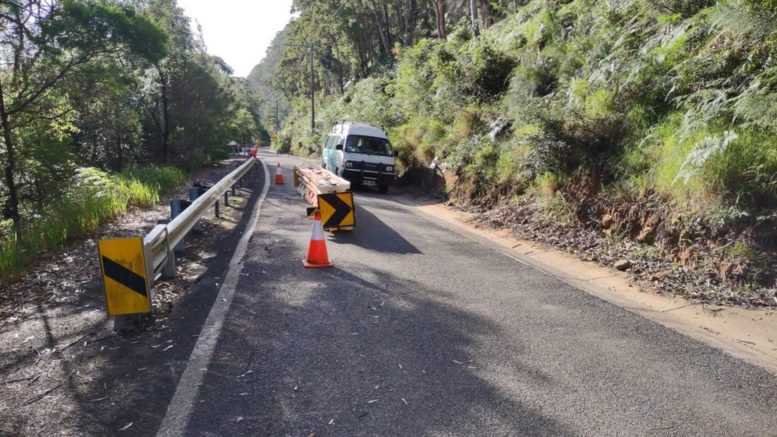 Central Coast Council is looking into a permanent fix for Wisemans Ferry Rd, with residents of Spencer and Gunderman furious at the dilapidated state of the major thoroughfare.

A Council spokesperson said works were undertaken last week to remove and replace pavement damaged by an embankment failure at Gunderman.

“The works were of an interim nature and served to reduce the risk of further collapse of the pavement,” the spokesperson said.

“Council’s priority was ensuring the road was safe for motorists to continue to use the road.

“Council is currently working with geotechnical consultants to accurately determine the extent of more permanent works, which is anticipated to include full embankment design and construction.

“Council is actively seeking grant funding to enable these works to be undertaken.”

River Cares President, Robyn Downham, said the interim works completed by Council last week were “to no avail” with the fix crumbling as soon as the road was reopened to traffic.

“I cannot (overstate) how concerning the current state of Wisemans Ferry Rd is from Spencer and Gunderman and all the way up to the ferry,” Downham said.

“Since 2012, the two failed embankments have continued to deteriorate and subside into the Hawkesbury River and since the floods in March 2022 there have been numerous landslides and hundreds of potholes and craters (created).

“Residents are furious with the constant decline of the state of this road, causing extensive damage to the rims of tyres, suspension and steering alignment.”

Downham said due to subsidence and erosion on the riverbank side of the road, Council had changed it from a dual carriageway to a single-track road with a ‘Give Way’ sign to allow motorists to share the road one direction at a time.

“This situation, especially now with the recent deluge of rain, has caused further deterioration of the road causing the shared single lane to be reduced,” she said.

“My fear is that eventually there will be a head-on collision.

“People are putting their lives at risk every time they drive on the road as they negotiate potholes and craters and school buses and emergency vehicles are at peril.

Downham said businesses are also being impacted as they miss out on flow-through from tourists as drivers avoid the road.

“Wisemans Ferry Rd is a secondary arterial road and is often utilised when a major accident or natural disaster occurs on the M1 and the traffic has to be diverted.

“In the meantime … sections of road continue to deteriorate and it will be just a matter of time (before) the road does collapse and/or subside especially with the large B double trucks constantly using (it).”

Downham said she had been notified by Council in 2018 that a permanent fix for the road had been identified as an Infrastructure Priority Project with funding avenues being pursued but had heard nothing since.

She said residents were outraged that works on Wisemans Ferry Rd had not been included in the $86.5M Central Coast Roads Package, funded by the Federal Government.

Some relief could be in sight if the Coalition is returned to government on May 21, with Wisemans Ferry Rd included in works to be funded under an extra $40M for roads maintenance on the Coast pledged this week by Prime Minister Scott Morrison.