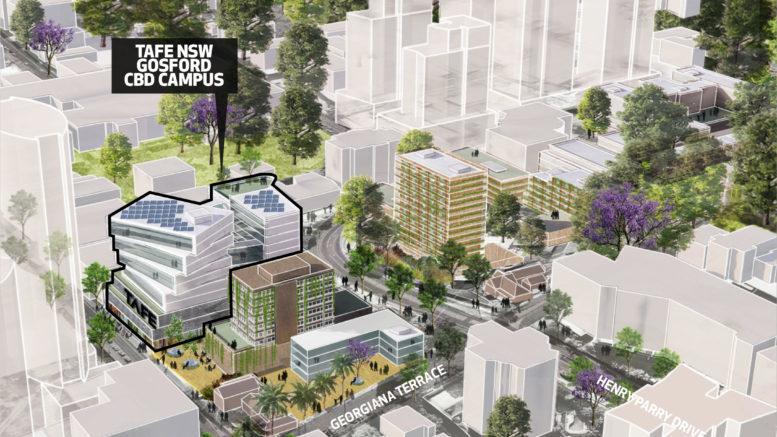 The TAFE concept takes in a large area along Mann St, Gosford.

Central Coast Council has begun the process to reclassify 73-75 Mann St Gosford in the first step to selling the community owned land.

Council wants to reclassify the land to operational which would allow it to sell the land as part of the TAFE redevelopment of the area which also includes the old Broadwater Hotel at 53-71 Mann St and the former Gosford council chambers at 51 Mann St.

The Department of Planning has received a request to amend State Environmental Planning Policy (Gosford City Centre) 2018 to reclassify the land.

The land at 73-75 Mann St, Gosford, was originally acquired in 2019 for the then proposed Gosford Cultural Precinct consisting of a Regional Library and Regional Performing Arts Centre (RPAC).

Upon acquisition by Council, the parcels of land were classified as community land.

In September 2019, Council resolved to withdraw from any further work on the Gosford Cultural Precinct and to proceed with a stand-alone Regional Library.

The Regional Library will now be developed on the site of the Parkside Building in Gosford at 123A Donnison Street.

The reclassification of land process requires the preparation of a Planning Proposal, community consultation as well holding a public hearing, using an independent facilitator.

The purpose of a public hearing is to give interested people an opportunity to have their say on the proposed reclassification before a decision is made, Council said.

The Planning Proposal is then finalised for Council endorsement following consideration of any public submissions and issues raised during the public hearing.

“The subject sites have been earmarked for inclusion in the TAFE NSW campus redevelopment and therefore the reclassification supports this,” Council said.

Council has a Memorandum of Understanding in place with the State Government about the development of the Gosford Administration Building into a TAFE site.