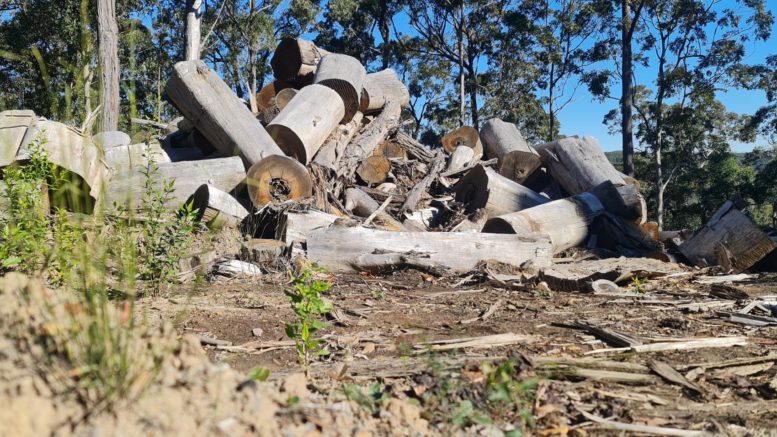 Camp Ourimbah spokesperson, Ursula Da Silva, was surprised by the positive outlook when she addressed a parliamentary inquiry into long-term sustainability and the future of timber and forest products.

For more than a year, community members of Camp Ourimbah have been protecting prime koala habitat in Ourimbah State Forest from being turned into low-quality salvage wood.

“I need you to stop logging Ourimbah’s forests today and turn them into koala reserves now,” Da Silva told the Inquiry.

Da Silva and Chairperson of the Gugiyn Balun Aboriginal Corporation, Brett Duroux, travelled to Coffs Harbour on April 29 to speak at the Parliamentary Inquiry.

They addressed a committee comprising Mark Banasiak of the Shooters Fishers and Farmers Party, Mick Veitch and Peter Primrose of the Labor Party, Wes Fang from the Nationals, Independent Justin Field, and Taylor Martin and Peter Poulos of the Liberal Party.

“The outlook appeared positive,” Ms Da Silva said. “I was surprised that most of the questions seemed quite affirmative, instead of critical, towards a healthy transition to ending native forestry logging.

“It is common knowledge that we must act urgently to ensure a safe future for our entire planet and its species, so I am hoping the committee took our evidence against native forest logging into serious consideration.

“If Forestry Corporation NSW was truly taking into account the sustainability of their industry, then they must answer to their contribution to a global climate crisis and a biodiversity collapse.”

Da Silva told the Inquiry that Australian biological scientist, Professor Lindenmayer, often cited the impact of logging on increasing fires and droughts in his research.

“Native forest logging also contributes significantly to our greenhouse emissions, releasing as much as a quarter of Australia’s transport emissions, as many of its products have a short lifespan such as paper pulp, wood chips or palettes.”

Da Silva said up to 60 percent of the biomass from logging was burned back into the atmosphere or left behind to become fire hazards.

She showed photos of log piles left in a South Coast area that soon after burned in the catastrophic Black Summer fires.

“There is nothing sustainable about this practice, in an economic or environmental sense,” Da Silva told the Inquiry.

“The demand for softwood is growing, which is plantation-based wood,” she said. “In fact 87 percent of the nation’s log production comes from plantations alone. The building industry does not require native forests for its continuation.

“It does not take great economic foresight to see that plantation-based timber, not native forest logging, is the way of the future. According to the AWE report, plantations and farm forestry provide the greatest opportunity for growth of the wood and paper industry.

“NSW would be wise to catch up with the growing trend of phasing out native forest logging, as seen in Victoria and Western Australia, and facilitate an inevitable and sustainable evolution of the industry using transitional packages as demonstrated by these states. It would benefit us in job security and provision,” Da Silva said.

“Such transition is key to helping the survival of our species and millions of others on a planet we must stop taking for granted.

3 Comments on "Plea to protect koalas from Ourimbah logging"