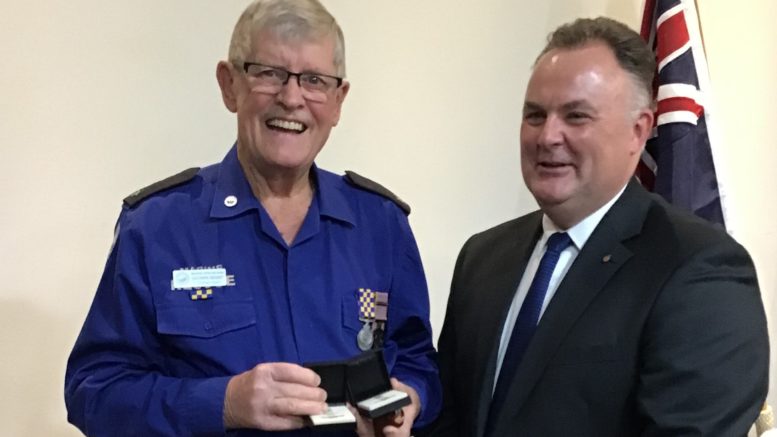 At the age of 80, Sherwin Hensby of Yattalunga is still volunteering with Marine Rescue Central Coast, which has its headquarters at Point Clare.

Hensby was one of 25 Marine Rescue members to receive Marine Rescue NSW Long Service Awards and National Medals at a recent awards evening.

Between them, the 25 recipients have chalked up almost 300 years of volunteer service.

Unit Commander, Ian Morrow, said the two awards systems, one state and one federal, run concurrently, with many people getting both.

With the Marine Rescue NSW award, members receive a badge at five years, a medal at 10 years and a clasp every 10 years after that, Morrow said.

“People are awarded a National Medal after 15 years’ service, followed each 10 years with a clasp.”

Hensby’s years of volunteering began with the Rural Fire Service, where he spent many years serving food to firefighters on scene through the RFS canteen, along with other duties.

“It was a real family affair,” he said. “My wife also gained her 25-year pin with the RFS and we used to get the kids involved too. I also used to run the Bunnings sausage sizzle fundraisers.”

When he moved to the Central Coast, Hensby joined the Coastal Patrol, which later morphed into Marine Rescue, with his service largely involving radio work.

“My work background was in communications so I used those skills in my volunteer work,” he said.

His expertise with communications saw him involved in three Olympic Games.

“I first went to the Atlanta Games in 1996 to look at their radio systems and how they were used,” he said.

“I then became part of the communications team for the Athens Olympics in 2004.”

His expertise with radios came to the fore when he joined Marine Rescue.

“My work with Marine Rescue is mainly manning the radio desk at base although I have also taught radio and first aid,” he said.

As part of the Green Watch, Hensby’s service has seen him man the radio desk most weekends for the past 20 years, working from 6am to 6pm in summer and from 7am to 5pm in winter.

Following a bout of cancer, he now works reduced hours but still turns up for his shortened shift each Saturday and Sunday.

“I don’t stay for the full day anymore but usually help organise lunch and stay until around 3pm,” he said.

Other members recognised at the awards night included Norm Smith of Ettalong, for 40 years of service, Phil Page of Aberglasslyn (near Maitland) for 30 years, and Harry Scales of Somersby for 25 years.

Crouch commended the recipients for their “amazing contribution” and service to the Coast totalling 295 years.