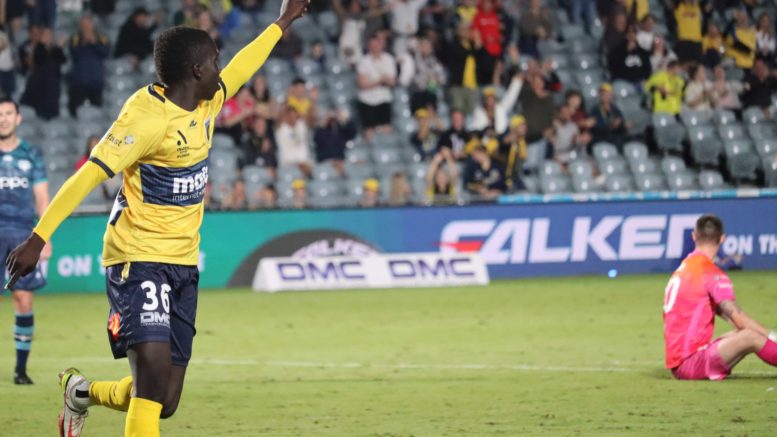 A single goal win over Western United in Gosford, April 30, has put the Central Coast Mariners one win away from a finals place with two games left to play.

A late goal for Garang Kuol broke the scoreless deadlock, pushing the blue and yellow four and five points clear of the finals contenders Macarthur and Sydney FC respectively.

It also denied Western the chance to top the A-League ladder.

Encouraged by the return of the Marching Band in the Central Coast Stadium stands, the Mariners brought an unmatched physicality that undermined Western’s attack.

At the other end, the Mariners displayed their developing array of goal scoring potential with shots on target coming from four new signings this season under Head Coach, Nick Montgomery.

The Mariners came close to the breakthrough initially in the 61st minute when Matheus Moresche slipped the ball neatly into the side of the net, only to be disallowed when N’Kololo’s assist was found to have been crossed from outside the field of play.

Monty’s 74th minute substitution brought Kuol into the fray, on for N’Kololo, and it took the academy product seven minutes to find the winning goal.

Given the space to turn onto his inside left boot off a pass from Marcos Urena, Kuol used spin and precision to swing the ball beyond Young’s reach and into the goal to score his third in six games.

Over the remaining 15 minutes, the Mariners focused on their late-game defence and prevented Western from accruing another shot on target, finally securing a win that sees them enter the final week of the season in finals standing.

Now in fifth place, the Mariners can still reach fourth and a home final with wins in both remaining matches against Brisbane Roar, May 3, and the Newcastle Jets, May 7.

Two draws will also ensure the Mariners a place in the finals.

“We have two games to go and we haven’t done anything yet,” he said.

“We don’t fear anybody, we go out every week to try win the game.

“We’ve got one home game to go (against the Jets) after going to Brisbane on Tuesday, but we’ll go there with the same mindset to get a result.”