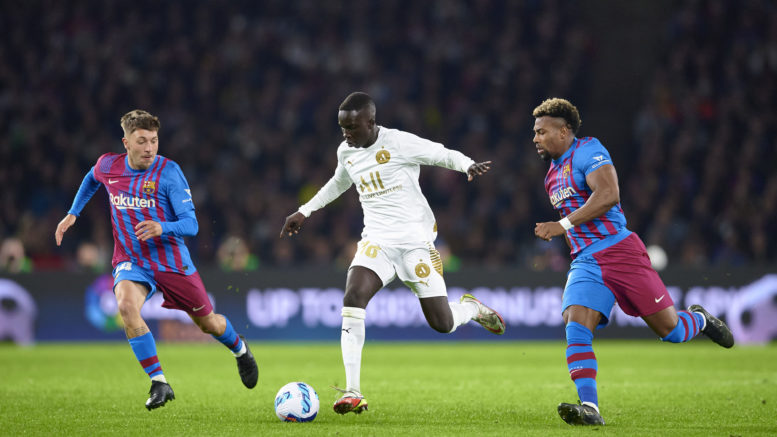 Garang Kuol of the All Stars controls the ball during the friendly match between FC Barcelona and the A-Leagues All Stars at Accor Stadium in Sydney, Wednesday, May 25, 2022. (AAP Image/Brett Hemmings)

Mariners rising star, Garang Kuol, stole the limelight from a long list of global soccer royalty on Wednesday night (May 25) playing for the A-League All-Stars against Barcelona FC.

Barcelona prevailed 3-2 over the All-Stars but were almost brought unstock by the Mariners youngster who came close to scoring twice after coming off the bench.

Kuol sliced through the Barca defence twice with one strike narrowly missing and the other rattling the woodwork.
Kuol racked up four goals in nine substitution appearances for the Mariners in the A-League season and is already being talked about for inclusion in the Socceroos squad.
Barcelona opened up the scoring after 30 minutes with a goal to Sergio Busquets, but the All-Stars hit back with a goal of their own to Piscopo following an incisive attack from Newcastle’s Daniel Penha.

The All-Stars second goal came six minutes later and Kuol almost made it 3-1 with his near miss.
With 20 minutes left, Barcelona drew level when Andrew Redmayne was unable to keep out an Adama Traoré strike before Ansu Fati put away the winning goal for Barca.

Barca boss Xavi praised Kuol after coming off the bench for the A-Leagues All Stars in their spirited 3-2 loss against the Catalan giants.
“He was very fast, and we conceded two or three chances because of him,” Xavi said.

“He’s a great player and he has a great future … he is a talent that is obvious.”
In a post-match interview when compared with his talented older brother, Alou, Garang Kuol took the opportunity to set the record straight.

“Alou always knew what was going on and that I was better than him.