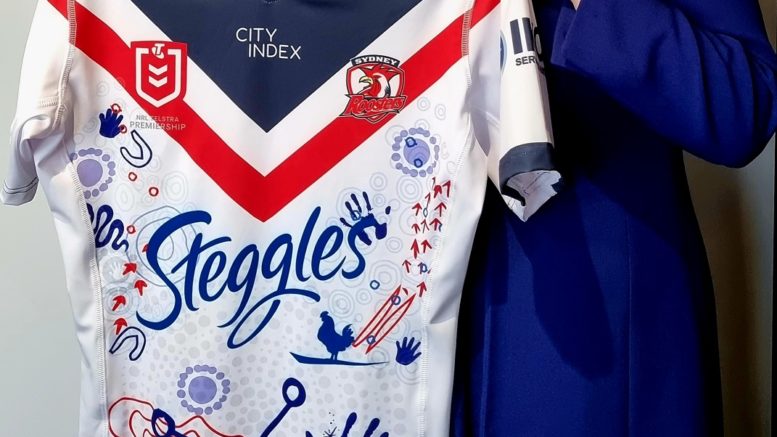 The Jersey worn by the Roosters in the Indigenous Round

Six Aboriginal young people at the Frank Baxter Youth Justice Centre at Kariong designed the Sydney Roosters Indigenous Round jersey that was worn on May 28.

Minister for Families and Communities, Natasha Maclaren-Jones, said the young men had chosen to share their personal stories through art, with the theme New Growth, New Hope for the Roosters Indigenous Round jersey.

“It is wonderful that these young men were inspired to participate in this because of their own personal sense of growth,” Maclaren-Jones said.

“One young man created a hand print with two boomerangs and crossing rivers, which expresses his new found connection to his country and culture and his positivity towards the direction his life is now heading.”

Other elements include a rainbow serpent and surrounding dot work, representing the creation of new opportunities and experiences as well as growth in the community and the meeting place in running water painted in the tricolours of the Roosters – a reflection of self-progress and new life choices.

The collaborative design for the jersey was led by La Perouse based Aboriginal artist Jordan Ardler from the Cultural Choice Association – an Aboriginal non-profit organisation committed to combating youth suicide rates in Indigenous communities by engaging at-risk young people through mental health and wellbeing programs.

Sydney Roosters Chief Operating Officer, Jarrod Johnstone, said that the players wre proud to be wearing a jersey which is a celebration of hope, community and the brightness tomorrow may bring in the Indigenous Round.

“The CCA was founded by Roosters player and proud Gamilaroi man Connor Watson and his family in the wake of the sudden and devastating passing of their young family member,” Johnstone said.

“The association has worked with a number of groups of at-risk young people since 2017, with a particular focus on those in the youth justice system.

“This design encapsulates a sense of what is possible when the next generation of Aboriginal young people are given the space to have their voices heard, are supported to express themselves, to seek help when they need it and, most importantly, have their potential believed in.”

Source:
Media release, May 27
Minister for Families and Communities