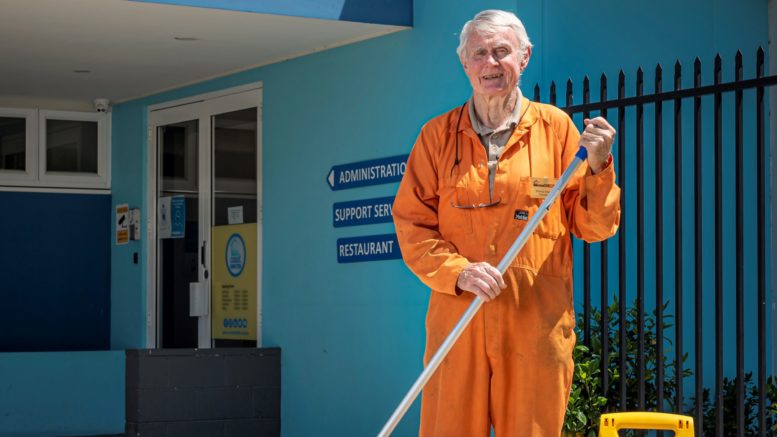 John O’Reilly remembers what it’s like to have nowhere to stay and no money.

Affectionately known as Shamus, he is one of 110 active volunteers at Coast Shelter who will be celebrated during National Volunteer Week from May 16-22.

O’Reilly recalls a time in the early 1960s when he made his way to Adelaide on the promise of work which didn’t eventuate.

He had nowhere to stay, no money, and was unable to carry his belongings on him for fear of looking homeless and being denied any other work.

“Being on the streets, it was difficult to keep clean and presentable,” he said.

O’Reilly said he knows that having a meal provided and access to showers, washing machines and more provides a sense of self-respect and confidence to someone facing challenges.

A retired merchant seaman, O’Reilly was partly raised in orphanages and has a strong sense of responsibility for those in need of a helping hand.

A volunteer with Coast Shelter since 2002, he dons heavy-duty overalls to do a weekly commercial clean of the community centre restaurant.

Coast Shelter will feature its volunteers on social media all week, as part of Volunteering Australia’s National Volunteer Week, which this year has the theme of “Better Together”.

The Coast Community Centre aims to provide a hand up when times are tough.

“But it ensures the kitchen and all the appliances are kept in great operational condition each week,” she said.

“The tough task of cleaning the appliances, rangehoods, filters and heavy plastic floor mats is not for the faint-hearted.”

Hogan said the centre has enjoyed a 5-star rating by Council Health Inspectors, thanks to the efforts of O’Reilly and other volunteers.

CEO Michael Starr said Coast Shelter would find it challenging to deliver the great outcomes it achieves each year for clients without its volunteers.

“This year’s National Volunteers Week theme could not be more appropriate, as Coast Shelter is ‘Better Together’ when our volunteers serve alongside us,” he said.