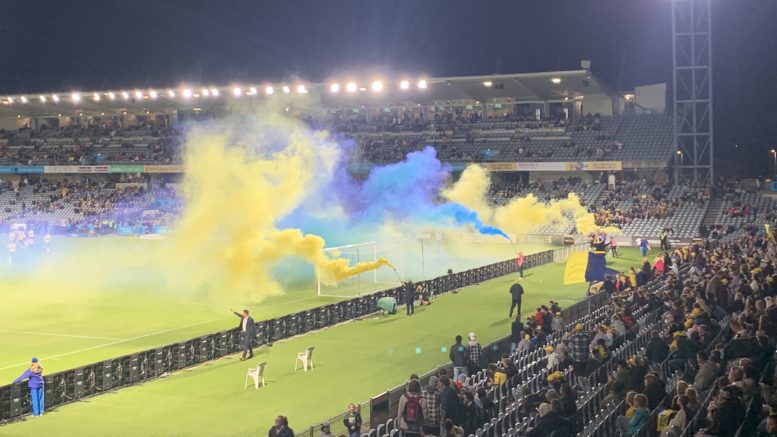 Coloured smoke at the stadium. The 11,000 strong crowd witnessed a good win for the home team.

The Central Coast Mariners are back after years in the wilderness, following a resounding 2-0 F3 derby win, and local fans can sense their resurgence.

The young team pulled off a powerful 2-0 win against the Newcastle Jets on Saturday night at Central Coast Stadium in what’s dubbed the ‘F3 Derby’, in the last game of the regular season.

The victory is the fifth win in a row for the rising Mariners outfit and puts them temporarily into four spot on the A-league ladder.

A goal from Jason Cummings in the first half was added to in the second by Frenchman Béni Nkololo and the Mariners finished off the season in great fashion with three points against their Novocastrian rivals.

A home final beckoned but, unfortunately for the blue and yellow, and their local fans, Adelaide United edged out Western United in Sunday night’s clash (May 8) to regain fourth spot – Adelaide will host the Mariners this coming weekend in the first round of elimination finals.

The only concern for the Mariners was the injury to Moresche who was unable to continue but Mark Birighitti pulled off a few strong saves to cement his position as one of the best goalkeepers in the league.

For the Mariners, their eyes now turn to the elimination final against Adelaide this coming weekend. A win at Coopers Stadium is historically a very tough ask for any finals team. The young and confident Mariners team have the momentum of a 5 match winning streak to their advantage, though so does Adelaide.

“We had a job to do and that was to get three points for the finals and I thought the atmosphere was great.

“There’s been a lot of firsts, the first FFA Cup final for the club this year, 15 NPL boys playing..

“[It’s] Testament to this group of players they go out every week and I set them a challenge and that’s to win a game.. football’s hard, scoring goals is hard but when you work as a team..

“It was a great way to win the regular season, at home in front of the fans..”

“We’re not afraid to go anywhere, what was in our tonight hands was winning and finishing the season on a high”

Separately, a new investor/owner has also entered the mix. Anytime Fitness co-founder, Richard Peil, has taken over as head director of the club from UK based owner Mike Charlesworth. CCN will update the public as more information comes to hand.