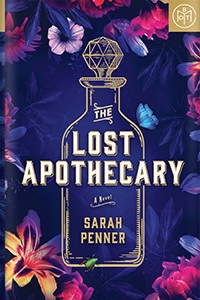 Nella is an apothecary In London 1791, just as her mother was. Nella’s mother dispensed tonics, oils and elixirs to help women in all that ails them.

There weren’t many places that catered to women back then, so the help Nella’s mother offered was invaluable. Back in Nella’s mother’s days, it was a “reputable” women’s apothecary. Nella also dispenses tonics, oils and elixirs to help women. But the apothecary is no longer reputable.

Nella has to hide what she is doing. She has a false wall … she hides in the back. Nella sells poison.

What happened to Nella that made her do this?

Three centuries later Caroline, who lives in Ohio, is in London for her anniversary, but aren’t anniversaries supposed to be celebrated together? Turns out that right before the trip Caroline found out that her husband, James, has been unfaithful.

So, Caroline decides to take the trip solo which will give her time to think.Think about all the sacrifices she has made for James. Sacrificing her dream to go to Cambridge to study history. But opportunities for history majors were rare, so she had to take a job keeping the books for her father’s farm. That was not her dream. Facing reality was not her dream.

This is her first time in London and not wanting to stick to an itinerary that was customised for a couple Caroline meets a quirky local that talks her into going mudlarking. Mudlarking means digging in the mud on the River Thames looking for treasures.

And by a stroke of luck Caroline stumbles across a vial.

As a history major this discovery churns up all of the dreams Caroline thought were dead. Turns out they were just dormant, waiting for a chance to spring up.

Back in time, Nella gets a letter from a new client that needs her services. But as the client comes to collect the goods, Nella is surprised to find it is a twelve-year-old girl. Eliza is a lady’s maid and knows why she is at Nella’s. She knows that what she is going to do will kill her master. But she believes this has set off a series of events that has haunted her and is searching for a tonic of her own that will keep the ghosts at bay.

Eliza’s presence will be dangerous for Nella.

In Caroline’s search about the origins of the vial she enlists the help of Gaynor who works at the British Library and has access to the old maps of London. Could a crude etching on the vial lead to its origins?

Things become complicated when Caroline’s husband surprises her by showing up in London and begging Caroline to forgive him. She is not sure how to process this or if she is ready to go back to life as she knew it. But what lengths will James go to in order to get Caroline back.

History does have a way of repeating. Chapters alternate between the points of view of Nella and Eliza in 1791 to Caroline.

Discovering Nella’s story was interesting, but I felt there was more to tell. She seemed to suffer from many ailments, but as an apothecary, she didn’t seem to try to heal herself.

Eliza was entertaining but Caroline was annoying. And how Caroline is able to uncover a mystery three centuries later is pretty far-fetched. Scratch that, it’s really far-fetched.

I enjoyed the story of Nella and felt that could have been a book on its own without the distraction of Caroline.

As an aside, Fox Broadcasting Company is doing a television adaption of this story.