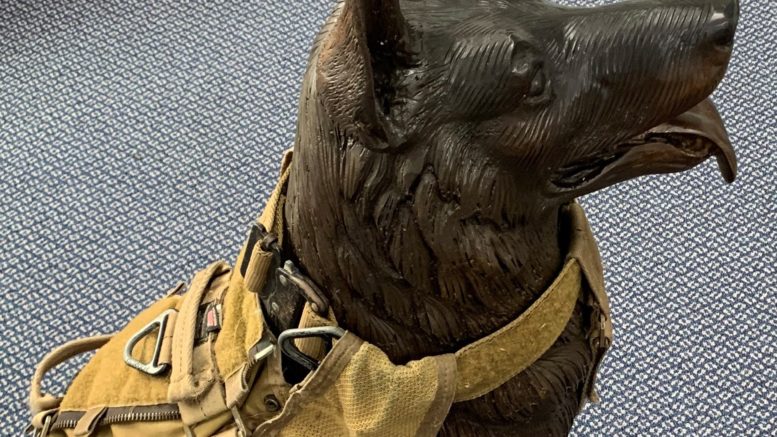 A bronze statue of a German Shepherd, honouring animals that have served the armed forces of Australia, will be unveiled at The Entrance Cenotaph, thanks to The Entrance Long Jetty RSL sub-branch.

Ever since Australian armed forces have served overseas, animals have assisted their handlers with distinction.

Bob Fitzpatrick, Assistant Secretary of The Entrance Long Jetty RSL sub-Branch, said that in 1943 an award, the Dickin Medal, was instituted in the UK to honour the service of animals, and the medal ranks with the Victoria Cross.

“We can look back to the First World War where carrier pigeons did their bit in aiding communication from the front lines.

“Also who can forget Simpson and his donkey at Gallipoli, or the cavalry charge at Beersheba where the famed Waler horses carried their soldiers to victory?

“More recently, the bravery exhibited by the handlers and their dogs in exposing improvised explosive devices in Vietnam, the Middle East and Afghanistan. At the present time dogs are serving in Army and RAAF units,” he said.

The Entrance Long Jetty RSL sub-branch approached Central Coast Council two years ago to discuss the memorial, and have funded the project.

The statue will be unveiled this month in time for ANZAC ceremonies.