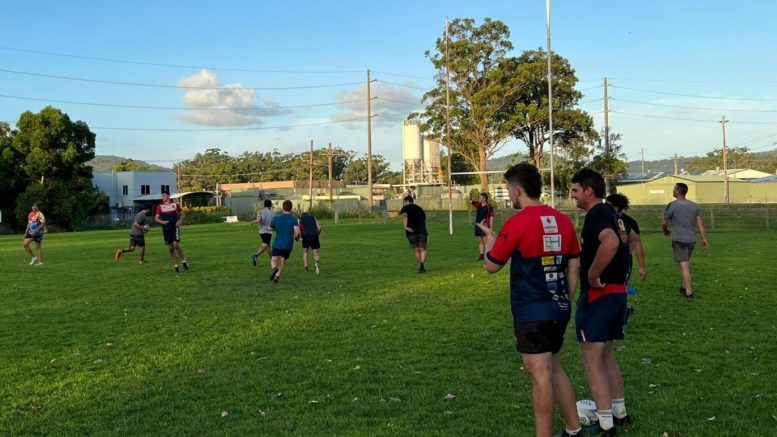 The Gosford team in training during the off season

After the scheduled opening round of the Central Coast Rugby Union 2022 competition was cancelled last week due to ground closures, organisers hope Round Two games will go ahead this Saturday, April 9.

Round One games were cancelled on April 2 when Central Coast Council closed all grounds in the region due to soggy conditions, with the Board to meet this week to decide how to accommodate the abandoned clashes.

Meanwhile, it’s full steam ahead with Round Two.

“Last season was extremely different, with many new experiences brought upon local rugby due to the COVID-19 pandemic,” spokesperson Larry Thomson said.

“The fact that the 2021 season finished in June was a massive disappointment to all concerned.

“We are hoping this season will be a much more normal one.

Thomson said the extremely wet weather in recent weeks meant teams had found it almost impossible to have a normal team training session.

“All teams will be a little underdone in their preparation so upset results could easily result.

“The first few weeks will be very important in telling us the form and prospects of teams this year.”

Round Two sees four Swietelsky Premier 1 matches, all of which are expected to be extremely close.

The match of the day will be the clash between Terrigal and The Lakes at The Haven.

Terrigal will be slightly favoured to win as reigning Premiers.

With great depth and experience, Terrigal is coached this year again by Michael Farrelly.

The Lakes were having a wonderful year in 2021 and were right in the picture when the season was curtailed and are expected to be strong again in 2022 under coach Marshall Hemopo.

The second game will see Warnervale take on Kariong at Kariong Oval.

These two teams had differing seasons last year with Kariong well positioned when the season was cut short while Warnervale had yet to get a win in 2021 despite several very close results.

Kariong seems to be well prepared under new head coach Louise Ferris while Warnervale has Glen Gallagher in charge as club coach and is reported to have strengthened the player roster this year.

The match will be played under lights, kicking off at 6pm – the first night game at Heazlett with the new lights.

Avoca Beach may go into the match as slight favourites because of the home ground advantage and the strong experience new coach Michael Burgess will bring to the squad.

Hornsby is coached this year by Tristan Jones and Chris Woutersz, so the match sees many new faces both off the paddock as well as on the playing field.

Gosford and the Ourimbah Razorbacks meet at Gosford Showground in what should prove an exciting clash with the Razorbacks going in as firm favourites.

Ourimbah performed well last year and Gosford is coming back into the competition after being forced to withdraw in 2021.

They have a new coach in Jack Pike but will go into the clash with a very inexperienced squad of players.

The Bay Rugby Club will only be playing in the President’s Cup once again this year.

On Saturday they will play Woy Woy at Woy Woy Oval in their first match and the result of this match is almost impossible to predict.

This year the clubs continue with 10-a-side rugby and there will be seven teams in this year’s competition.

It will take several weeks before these teams sort themselves out but it all makes for some interesting rugby in the opening rounds of this year’s competition.

This weekend will see Hornsby play two matches, against Avoca Beach and the Razorbacks.

Terrigal will play The Lakes, and Kariong will host Warnervale.