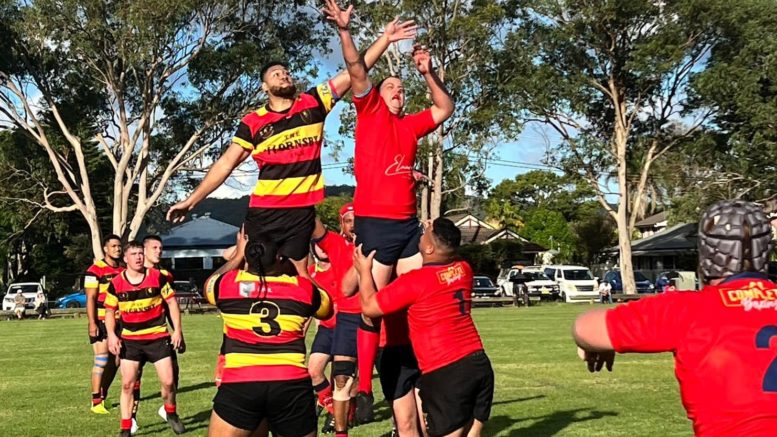 Hornsby proved too strong for Gosford at Ettalong Oval

After the first two rounds being postponed due to soggy ground conditions, Round Three of the Central Coast Rugby Union Competition took place on Saturday, April 23, with wins to Avoca, Warnervale and Hornsby and a draw between the Ourimbah Razorbacks and The Lakes.

The Match of the Day at Woongarrah Oval 2 saw the Razorbacks and The Lakes fight out a 33-all draw after an exciting game of rugby.

The Lakes went to the halftime break leading by 26-14, but the Razorbacks fought back and by midway through the second half the scores were locked at 26 all.

Both teams were to score a further converted try to make the final score 33 all.

Best players for The Lakes were hooker Ben Kaifa and centres Daniele Cakuseru and Ashton Hutchinson-Walters.

Kariong travelled to Heazlett Park to meet Avoca Beach in what proved an interesting match, the first to be played under lights at the ground.

There was nothing in the first half between the two teams with Kariong leading 7-5 at the half time break.

Avoca Beach went on to win the match, mainly due to the great goal kicking of Sam Evans who converted four penalty goals in the second half to secure the 17-12 victory.

Best players for Avoca Beach were lock Jake McPhie, halfback Mitch MaGrath and tryscorer and fullback Jono Hirst, while for Kariong the best efforts were put in by lock Nic Outram, No.8 Logan Campbell and centre Josh McGlynn.

Woongarrah Oval 1 saw a one-sided battle in which Warnervale recorded a 53-0 victory over Woy Woy.

Warnervale took control early in the match and never looked back, giving Woy Woy little scope to get back into the game.

Warnervale went to the halftime break leading 22-0, continuing in the same vein in the second half to post a further 31 points.

Hornsby proved too strong for Gosford at Ettalong Oval and ran out winners by 38-13.

The match was moved from Gosford Showground due to wet ground conditions and it was great to see Gosford back in Premier 1 after being unable to enter a team last year.

They opened up the scoring and led by 6-0 before Hornsby crossed for their first try and then continued to take control of the match.

Hornsby had jumped to a 24-6 lead at half time and dominated in the second half.

Round Four on April 30 will see more exciting clashes.

The Match of the Day will be the clash at Ourimbah Rugby Park when the Razorbacks will host Avoca Beach.

The home ground advantage to the Razorbacks may be the only difference, in what will be a closely fought struggle.

Kariong will meet Hornsby at Kariong Oval and it is almost impossible to pick a winner based on round 3 form.

Terrigal will finally commence their season in a match against Gosford at The Haven Oval.

Terrigal had the bye last Saturday and will go into the match as favourite due to the home ground advantage.

Woy Woy will host The Lakes at Woy Woy Oval with The Lakes going in as firm favourites based on the results from last weekend.

Be the first to comment on "Rugby comp finally kicks off"