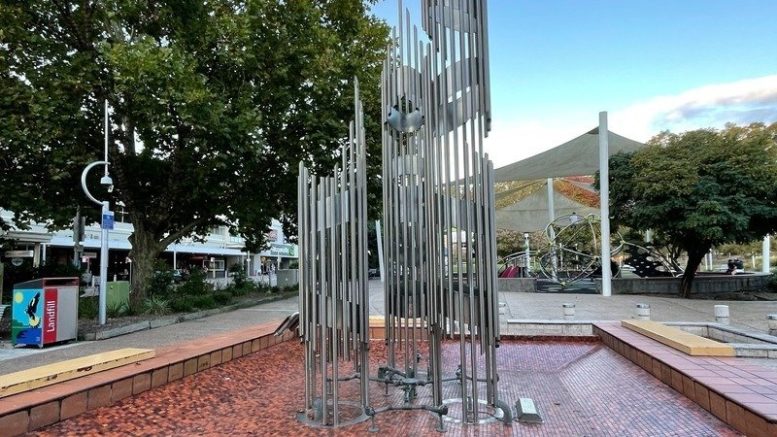 The sculpture and water fountain in Kibble Park

The family of the artist who created the sculpture and water fountain in Kibble Park, Gosford, is outraged by plans to relocate the metalwork to Sensory Park at Narara.

Michael Flakelar, the son of John Flakelar, who was commissioned by the then Gosford Council to design the feature in 1975, said the family was “very disappointed” by Central Coast Council’s recently announced plans to relocate the sculpture as part of a major upgrade of Kibble Park.

He said there had been community discussion about the future of the fountain, which has not operated since 2016.

“An assessment of the cost to refurbish the fountain and surrounding degraded area revealed it would not provide good value to the community or use of ratepayers’ money,” he said.

“However, strong feedback from the community was that there needed to be a plan for the future of the sculpture.”

Hart said relocating the sculpture to the revitalised Sensory Park at Narara would respect its original intention and allow for a creative re-integration of the work in a public space.

The sculpture would form the centrepiece of a newly designed labyrinth pathway, aimed at encouraging children and families to explore and interact with the artwork and the installation would also include solar lighting to help highlight the sculpture.

But Flakelar said the move would not be true to the intention of the feature designed by his father, who passed away five years ago.

“The piece was commissioned to commemorate the International Year of the Family and Dad spent several years in talks with Council over what was wanted,” he said.

“The sculpture and fountain were designed as one total piece – one doesn’t work without the other.

“Moving the sculpture would not to be true to the way Dad designed it.”

Flakelar said the piece has been designed to represent the family unit.

“This is a very important part of what makes up a ton like Gosford – or any other town in NSW,” he said.

“The fountain was a very important part of the whole – with the water intended to soothe.

“It was designed as a meeting place where people could get together and have picnics with their children.

“The combination of metal and water was intentional and symbolic.”

Flakelar said no approach had been made to the family regarding the plan and he felt it had been rushed through without any real consultation.

“It is foolish to destroy something that has merit and replace it with nothing,” he said.

“Dad moved to the Central Coast as a very small boy and spent his whole life working in Gosford.

“He attendee Gosford Primary and Gosford High schools and his company, Bannister and Hunter, did a lot of the planning work for the streets around the Gosford area.

“He put his whole life into Gosford and is part of the history of the district.”

Flakelar said it was highly disrespectful to treat his father’s legacy in this way.

“The sculpture and fountain was designed to be in the heart of Gosford – destroying it is outrageous,” he said.

Community activist Joy Cooper has started a petition to save the fountain and sculpture on change.org.

“The fountain was originally turned off when we were in a time of drought in 2016,” she said.

“When artists create works they shouldn’t be split up and changed.

“This piece was designed so it reflected the area where the first well in Gosford was.

“The feature was of cultural importance- it even used to feature on postcards of the area.”

Cooper said she has sent a letter to Council Administrator Rik Hart asking to see a Statement of Environmental Effects for the propos ed relocation.

“Council’s own website shows the Kibble Park Place Plan as still being in progress,” she said.

She also said she had concerns about how the major works involved would be budgeted.

“It would be a huge job to relocate the sculpture,” she said.

“The fountain itself would have to be excavated, including the mechanical workings, and the space refilled.”

She said she would like to see how costings on the proposal compared with costings on restoration of the fountain in situ.

“My understanding is that there was money put aside to repair the fountain and that money has been to other uses,” she said.

“In these times when there are potholes everywhere and rubbish not being collected, this seems like a strange use of ratepayers’ money.”

5 Comments on "Outrage over plans to relocate Kibble Park sculpture"