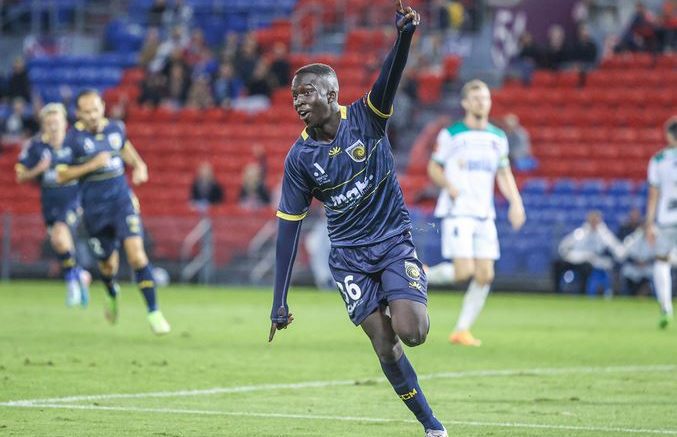 A 4 – 2 win against the Newcastle Jets at McDonald Stadium in a classic, physical M1 Derby showdown has returned the Central Coast Mariners into finals standings with three games left to play.

A three goal lead at half time, thanks to an opener from Matheus Moresche and two for Jason Cummings, was put to the test by an early second half Jets score and an own goal blunder by Jacob Farrell.

The Mariners then had to rely on a VAR over-rule after the Jets netted an equaliser, before finally securing a fourth, injury time goal by Garang Kuol.

The Mariners defence came close to buckling early in the game against strong forward momentum from the Jets, leading to a dominance in possession and requiring two fingertip saves by goalkeeper, Mark Birighitti.

Holding tight and trusting once more in their incisive forward balls from the defensive third, the Mariners then undermined their hosts’ control on the game with a 19th minute goal for Moresche.

A through ball was delivered by Dan Hall, calling on Moresche to outmanoeuvre Taylor Regan and first-touch chip the ball from outside the penalty area over Jack Duncan’s head as he advanced from goal.

The goal brought extra physicality from the Jets earning their first of four yellow cards in the 22nd minute.

But the Mariners extended their lead in the 30th minute with a goal from Jason Cummings, his sixth goal in seven games, scored off Ben N’Kololo’s free-kick entry from the corner.

First taking a deflection off Jordan Elsey, the ball dropped in front of Cummings’ head with an open net beckoning.

Only four minutes later, the Mariners added to their lead after a foul by Matthew Jurman against N’Kololo in the box saw Cummings line up and slot the penalty into the top of the net.

The Jets responded aggressively after the break however and quickly netted their first goal by Lucas Mauragis in the 46th minute.

Jason Hoffman found space out wide before crossing the ball to the far side of goal for Mauragis to advanced onto and finish with a light touch in front of goal.

Only four minutes later, the mounting Jets pressure re-opened the contest when a faulty clearance by Farrell inadvertently slipped the ball into the corner of his own net.

On the back foot yet holding a one-goal lead, the Mariners soaked up fierce one-on-one contests, a deficient amount of possession and the continuing rain to prevent an equaliser from their hosts for over 30 minutes.

In the 82nd minute however, the defence parted enough for the Jets’ Savvas Siatravanis to head in an equaliser, only for the VAR to rule that Kye Rowles had been illegally pushed in the back and out of the contest.

In the end, it took the late energy of Kuol, fresh off the bench, to put the game safely to bed with a goal in the 91st minute.

Birighitti’s long free-kick forward was adeptly headed along by N’Kololo, ahead of Kuol running into space.

The young Mariner rookie sniped the ball on its second bounce across goal and beyond the stretched fingers of Jack Duncan.

In the game’s dying moments, the Jets Daniel Penha earned himself a red card, reducing his team to ten men for the final minute of play.

For the Mariners, the win momentarily boosted them into fifth position.

The contest for the top six is still very much alive with Adelaide, Wellington, Macarthur and Sydney FC all in close contention for the bottom three finals positions.

The Mariners will return on Saturday, April 30 to play Western United at Central Coast Stadium.