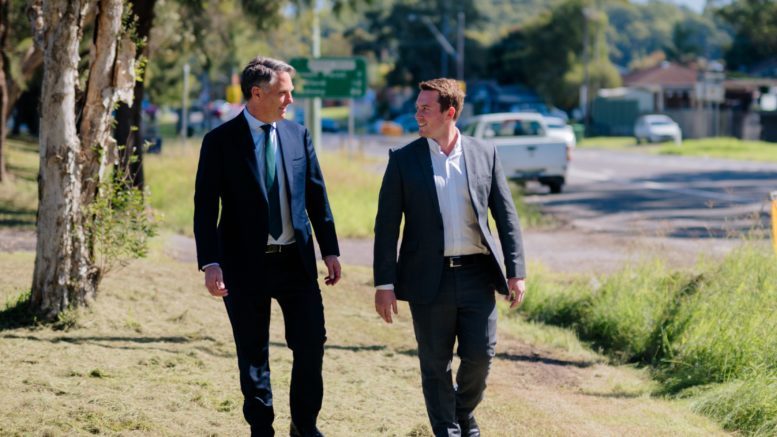 Liberal State and Federal MPs on the Central Coast have slammed a $30M election pledge by Labor for an upgrade of Avoca Dr at Kincumber as ill-conceived and poorly costed.

Reid claimed the project would create local jobs in the construction phase and allow locals to get more quickly and safely to work, the shops, school or weekend sport.

He said the funding would cover both planning and construction of the upgrade, which would be carried out in close consultation with the NSW Government.

“Avoca Dr has long been known as a pinch point in the daily commute for Coast residents,” he said.

“While the planning process will determine the exact works to be undertaken, it could include a widening of the road between the Carrak Rd and Killuna Rd intersections as well as creating a safer road for pedestrians and cyclists.

“Not only will this project create local jobs in the construction phase, it will deliver a better life for working families across the Central Coast, allowing locals to get more quickly and safely to work, the shops, school or weekend sport.”

He said residents are always raising road congestion as one of the key issues affecting their daily lives.

“This investment is a big win for our community, meaning locals can spend more time at home and less time stuck in traffic,” he said.

Marles said investments like this make a real difference for communities, creating a better built environment for businesses and the community alike.

But Liberal Federal Member for Robertson, Lucy Wicks, said the project has not been properly costed and collaboration with the NSW Government was needed.

“There has been absolutely no consultation with the community, businesses or the NSW State Government (which) is ultimately responsible for delivering any upgrades on Avoca Dr,” she said.

“(Labor) needs to understand that roads and congestion busting projects are key issues for people across the Central Coast.

“It is astounding that Labor would announce funding for a road without any consultation on how much the project could cost or how it could be completed.

“Residents in Kincumber deserve better, motorists across our region deserve better and the Central Coast Community deserves better than thought bubbles and cash splash announcements with no plan to deliver better roads infrastructure for our region.”

State Parliamentary Secretary for the Central Coast, Adam Crouch, said it was disappointing that Labor hadn’t done its research prior to making the announcement.

“Again we are seeing Labor fail the people of the Central Coast when it comes to road infrastructure with this recent announcement about a random funding commitment in regards to Avoca Dr,” Crouch said.

“Had Labor bothered to do their homework on this, they would have found out that their commitment is estimated to be less than half of what is actually required to address congestion on the stretch of road that they announced.

“Regardless, this announcement will do absolutely nothing to reduce congestion for the thousands of commuters who use this road every single day and is another Labor road announcement that will never happen.

“Anyone who had any local knowledge would realise that the congestion point is the intersection of Bungoona/Carrak Rd and Avoca Dr.

“Extensive traffic modelling and planning is required to be able to address the congestion that this complicated intersection creates,” Crouch said.