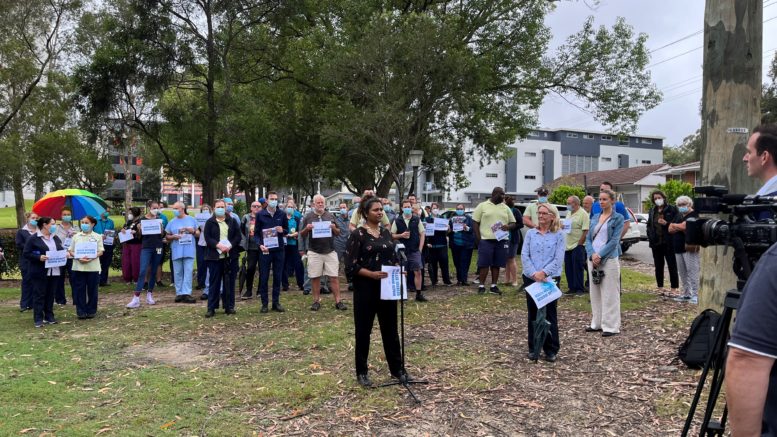 Dozens of health workers at Gosford Hospital walked off the job for two hours at 10am on April 7, joining industrial action held across the state as the strain of COVID, exhaustion and higher cost of living mounts.

Workers exited the hospital at 10am to gather outside and discuss further action.

The Health Services Union (HSU) announced it would proceed with mass industrial action involving thousands of health and hospital workers across ambulance, cleaning, allied health, admin, security, catering and wards will, following a hearing earlier this week at the NSW Industrial Relations Commission.

The HSU said that after weighing arguments from the Union and Ministry of Health, the Commission has opted for a conciliation hearing next week.

It said this comes after repeated attempts by the HSU to open up the state’s hospital awards and begin genuine bargaining for productivity-based pay rises had “fallen on deaf ears”.

The HSU is campaigning for a 5.5 per cent pay rise to account for the impact of the pandemic, and the surging cost of living, along with a broader shift that replaces the State wage cap with genuine bargaining to reflect the enhanced skills and productivity of the health workforce.

“They were exposed to COVID without a vaccine or appropriate protective equipment for months, then they endured exhaustion and anxiety and now they have been rewarded with surging prices and a collapse in real wages.

“Being called a hero doesn’t put money in the bank when you’re skint before pay day.”

“The Government’s policy of capping wage rises at 2.5 per cent doesn’t even keep up with inflation,” she said.

“A fair pay rise for healthcare workers in NSW is well overdue.

“Let’s be clear: what the State Government is offering is a pay cut.

“By refusing to negotiate, they’re effectively cutting the wages of healthcare workers during a pandemic and risking the full-scale collapse of our healthcare system.

“This is the third health sector strike we’ve seen in NSW in six weeks.

“Workers are burnt out and desperate for things to change.”

Faehrmann said with prices rising, housing costs skyrocketing, and pressures from chronic understaffing at work, workers were leaving the health system in droves.

Separately, the NSW Nurses and Midwives’ Association (NSWNMA) has held talks with the NSW Government this week over the need for staffing improvements and better pay for nurses and midwives.

Off the back of last Thursday’s second statewide strike, the NSWNMA met with Health Minister Brad Hazzard and Finance Minister Damien Tudehope to discuss the widespread staffing crisis gripping the public health system.

“We had the opportunity to discuss the dire staffing crisis in our public hospitals, as well as the extraordinary lengths nurses and midwives are having to go to maintaining health services,” he said.

“There is an awareness by government that we need more nurses and midwives to deliver safe patient care and how unsustainable the current working conditions are, particularly for the future.

“We appreciate the pandemic has created challenges for the health system, but it has exposed a myriad of issues, including the need for our nursing and midwifery workforce to be enhanced beyond its normal annual growth.

“It took a huge amount of courage for our members to participate in last week’s 24-hour statewidestrike – they were angry their ongoing pleas for help and support had been ignored.

Meanwhile, the NSWNMA has been summoned to the Supreme Court next week for breaching orders issued by the NSW Industrial Relations Commission in relation to strike actions held on 15 February and 31 March.

The NSWNMA maintains the recent industrial actions were necessary to advocate for safe patient care and for the wellbeing of a burnout nursing and midwifery workforce across NSW.