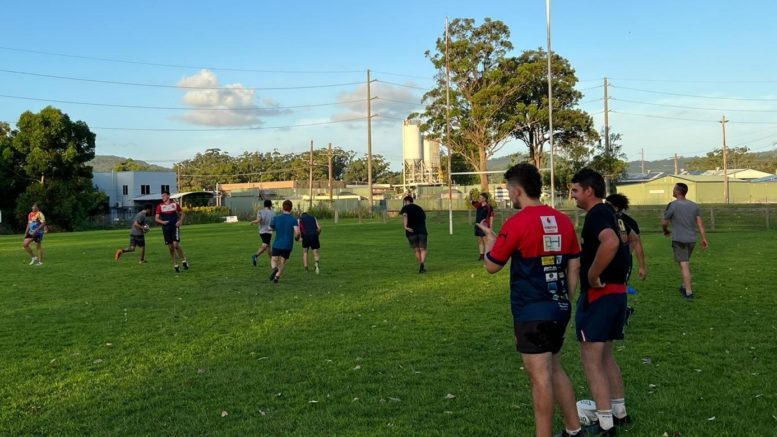 The Gosford team in training during the off season CCN339

Central Coast Rugby Union hopes next Saturday, April 23, will be third time lucky as it plans to commence the 2022 season.

After seeing the first two rounds postponed due to west weather, to be played later in the year, spokesperson Larry Thomson said everyone is hoping the season will finally kick off on Saturday.

The round will see four Swietelsky Premier 1 matches with close results expected in all four.

The Match of the Day will be the clash at Slade Park when The Lakes will host the Razorbacks, with the Ourimbah team going in as slight favourite due to its good performances last year.

The Lakes has the home ground advantage to offset this, so this match will go right down to the wire, Thomson said.

The Razorbacks, like all teams, have found the pre-season so difficult because of the very wet conditions of late.

“Because of the extremely wet weather of late, teams have found it almost impossible to have a normal team training session,” Thomson said.

“All teams will be a little underdone in their preparation so upset results could easily result.

“The Lakes were having a wonderful year in 2021 and were right in the picture when the season was curtailed.

“They will be strong again in 2022 under coach Marshall Hemopo.

“He has had a most successful couple of years and he will be hoping his team will go right through to the big ones this year.

“This will be a hard fought and exciting match at Budgewoi.”

Heazlett Park will host an equally interesting clash on Saturday between Avoca Beach and Kariong.

The two teams had very similar seasons last year with both well positioned when the season was cut short.

Michael Burgess, the Avoca Beach coach, will also have his charges fully prepared for this clash, Thomson said.

“These two coaches would be just keen to get onto the paddock, and obviously would be hoping for a victory first up,” he said.

“It is very difficult to choose a winner in this clash because of so many unknown factors, and it may just be the home ground advantage for the Avoca Beach side that will see them in front at the 80 minute mark.”

Hornsby is coached this year by Tristan Jones and Chris Woutersz and will go into the clash as very clear favourites, Thomson said.

“They had a great season last year and have been preparing well for this season,” he said.

“There is also the factor that Gosford is coming back into the competition after a most difficult 2021, having had to withdraw.”

Gosford has a new coach in Jack Pike and will go into the clash with a very inexperienced squad of players but a group determined to do well.

Woy Woy and Warnervale meet on Saturday at Woongarrah Oval.

“This is a most difficult match in which to predict a winner,” Thomson said.

“Both teams will want to have improved seasons, both having had ups and downs last year.

“Both teams have reportedly built up in the off season but it all becomes a reality on Saturday when they will see how much improvement has taken place.”

Warnervale goes in with the home ground advantage which is a huge plus.

The Bay Rugby Club will only be playing in the President’s Cup once again this year.

On Saturday they will play Terrigal at home at Joseph Banks Oval in their first match with the result almost impossible to predict.

This year the clubs continue with 10-a-side rugby and there will be seven teams in this year’s competition.

“It will take several weeks before these teams sort themselves out but it all makes for some interesting rugby in the opening rounds of this year’s competition,” Thomson said.

This weekend will see Terrigal playing Warnervale, The Lakes will host the Razorbacks, and Avoca Beach will meet Kariong.