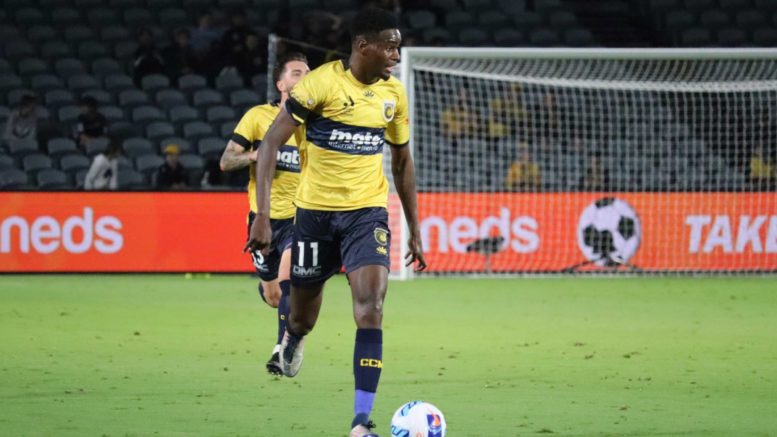 Finals hopes for the Central Coast Mariners remain alive yet strained after a 2-2 draw against Western Sydney Wanderers on Wednesday, April 13.

Settling for one point came as a relief for the travelling Mariners, who were down two goals and one player with a third of the match to play.

The opening minutes brought big chances at both ends, Marcos Urena coming closest for the visitors with a right-foot shot across goal, skimmed away with a fingertip touch by Wanderers keeper, Majias Osorio.

The physical hosts kept up the pressure with a rising share of possession and their breakthrough came at the close of the first half through a Kye Rowles own goal.

In his 100th A-League match, Rowles put an unfortunate touch on Tate Russel’s high-paced cross into the box, diverting the ball into the corner of Mark Birighitti’s net.

The pressure on the Mariners multiplied shortly into the second half when Lewis Miller was sent off after a contest for the ball against Adama Traore, his yellow card upgraded to red due to a VAR check.

A second goal for the Wanderers followed five minutes later, scored by Dimitrios Petratos in the 54th minute.

Traore exploited the extra space on the right wing, cutting into the penalty area and finding the pass across goal to Petratos, waiting on the edge of Birighitti’s reach.

With a mountain to climb, the Mariners showed their finest quality, maintaining their attacking vigour to the dying moment.

A 62nd-minute handball by Steven Ugarkovic gave the boys in yellow a penalty, which Beni N’Kololo’s fired into the corner of the net.

The equaliser came in the 94th and final minute, a first goal of the A-League season for centreback, Daniel Hall.

The all-out-attack involved five passes back and forth inside the Wanderers penalty area, starting and ending with Hall, made possible by the quick reactions of Jacob Farrell, Garang Kuol, and assister, Cy Goddard.

For head coach, Nick Montgomery, the comeback was testament to the strong character of his young team, who might have won the game in ordinary circumstances.

“I thought we showed massive character that epitomised the culture of the club,” he said. “The team spirit tonight, the togetherness of the boys was plain for everybody to see.

“It’s going to feel like a win after the game considering we played with ten men away from home against everything, but on chances we should have won the game.”

With five matches left and qualification for the finals in the balance, wins are necessary for the Mariners chances.

The first opportunity will be against Wellington Phoenix, now returned to Sky Stadium in their home city, on Sunday, April 17.

“I don’t think there’s any pressure on us,” Monty said. “No one expected us to get to an FFA Cup final or in the top six, so the only pressure is what we put on ourselves every week, to perform the way that we play and stick to our belief and stick together as a group.”