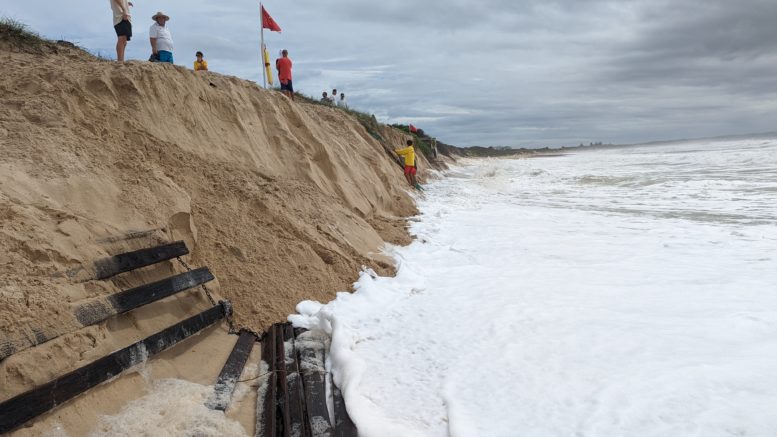 While eyes have been glued to flood levels around Tuggerah Lake over the past week, Lakes Beach suffered what is now being seen as the worst case of coastal erosion for the top end of the Coast.

Tuggerah Lake peaked on Sunday at the moderate flood level (above 1.3m) and by Monday dropped to the minor flood level at 1.27m, according to the Bureau of Meteorology bringing relief to those living around its perimeter and beyond.

That relief was not being experienced up at Lakes Beach.

The storms, swells and high tides that have wreaked havoc for the past few weeks have left the beach inaccessible from Lakes Beach SLSC for the first time ever.

So significant is the erosion that all three access points from the Club to the beach are now redundant as the drop, which has already grown to at least three metres, nudges the doors of Clubhouse.

Lakes SLSC President Sean Leicester says that most beaches at the northern end of the Coast have been hit pretty hard, especially Lakes, Soldiers Beach and North Entrance.

He said that erosion similar to this was seen up at Budgewoi a few years ago, but nothing like what they have witnessed at Lakes over the past week.

“Over the last three to four years there have been weather events that have caused some erosion, but nothing ever like this.

“In the past, it’s only been a couple of feet that has repaired itself … this time it has come directly in front of the Clubhouse and has taken everything with it,” he said.

The ocean started to batter the shoreline last Thursday when a high tide came in at 10:40 that morning and continued to push against the dunes throughout the weekend.

Leicester said the waves keep on eating into the dunes.

“We are losing a metre of sand dunes each day as the high tide comes in. Even at low tide, in fact,” he said.

Lakes Beach has lost all its footpaths, while the wooden disability ramp which has only been place for the last couple of years and made Lakes such an inclusive spot has lost 1.5m to 2.0m from its front portion.

Not only do the beaches remain closed, but the dunes are also too dangerous to walk on.

“When we were there yesterday (Sunday) we realised that, if you walk or stand on the edges, they crumble away,” said Leicester.

While it is Council’s responsibility to assess the beach and develop an action plan, Leicester is not convinced it could do anything productive right now.

“Even if Council were to come in and try to grade it, at least on the driveway access we have, I don’t know if they could do anything,” he said.

“We have to see what Council and the experts say.”

Unfortunately, for now, Lakes Beach SLSC does not have any access for its powered craft – to use the jet ski, or the power boat, the Club would have to launch from Norah Head boat ramp.

“We have no chance of getting anything down on the beach, apart from rescue boards and rescue tubes,” said Leicester.

As a result of the erosion, the Club cancelled its last planned Nippers Day for its younger groups, and while it was due to hold its championships for older Nippers next Sunday, the Club will make a call on that this coming Friday (11 March).

“It depends on what’s in the water – the water is filthy.

“And that’s just what we can see. Who knows what else is under the water,” Leicester said.

The Club said it is not expecting much to change until next season.

“It will take a fair bit of energy from the ocean to move it back,” he added.

The effort to halt the worst effects of the floods has been constant over the past week.

Council worked at The Entrance channel and created a new pilot channel to keep it open and flowing.

The Entrance channel was flowing out at low tide with an approximate width of 110 metres.

However, roads impacted by flooding continued to be closed in most low-lying suburbs on 8 March.

SES Wyong thanked the community for its efforts, supporting with the filling and distribution of sandbags.

Among those was the Killarney Vale Bombers who filled 15 tonnes of sandbags last Friday (4 March).

In the coming days, the Bureau of Meteorology is forecasting more wet and windy weather for the top end of the Coast that may result in renewed moderate flooding at Tuggerah Lake.

An evacuation centre is established at Diggers, The Entrance.

The evacuation centre is open 24 hours.