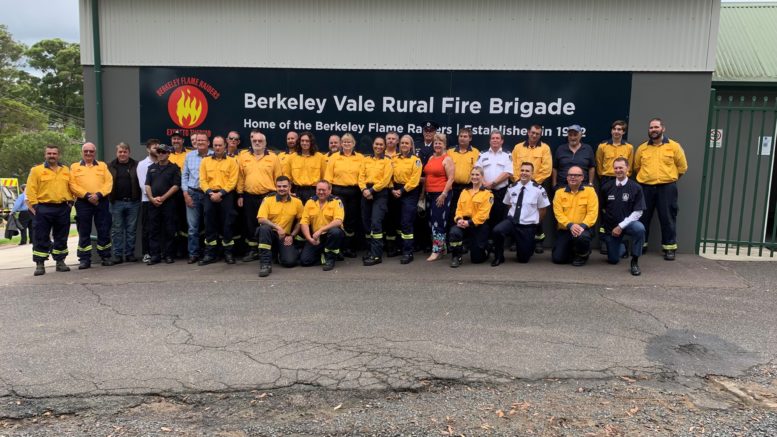 NSW Rural Fire Service (NSW RFS) members gathered in Berkeley Vale on Saturday, March 26, to celebrate their 70th anniversary and present members with medals in recognition of their dedication and service.

Member for The Entrance, David Mehan, joined the volunteers in a special ceremony to honour their dedication and hard work.

“I want to thank the Brigade for its work and congratulate the members who received a National Emergency Service medal for their work during the 2019/20 bushfires,” Mehan said.

“This Brigade has a proud history of community and spirit,” Mr Crouch said.

“Formed in 1952, the brigade now boasts 40 members and over the years has put in a lot of effort developing their skills with some of the most qualified in the District.”

Supt Baker said the Berkeley Vale Brigade was a very active brigade and attends a broad range of incidents including bush fires, structure fires, motor vehicle accidents, assisting the NSW SES with storm damage and at incidents out of area and interstate.

“I know the close bond between members became even stronger protecting communities during the devastating 2019/20 fire season and with such passionate, dedicated individuals this brigade will continue to grow over coming years,” he said.

Supt Baker said this celebration was an opportunity to not only congratulate the brigade on this milestone but also thank members for their ongoing commitment and service, with the presentation of 24 National Emergency Medals and one Long Service Medal.

“The National Emergency Medal was awarded to those whose service was in the protection of lives and property or in the service of interests that are not their own and who supported the emergency response for a minimum of five days between September 2019 and February 2020,” he said.

“Members of the Central Coast District played an integral part in the firefighting response during that season and rose to the challenge to protect communities.

“I also congratulate Jason Clunas on receiving the Long Service Medal 1st Clasp for 21 years’ service, as a member of the Kurnell and Berkeley Vale Brigades.

“The hard work and professionalism of all NSW RFS members does not go unnoticed and while they do not ask for praise, we should take this opportunity to acknowledge their contribution and commitment to their community.

“We must also thank the family, friends, employers and colleagues of these and all volunteers. We know it takes their support to help our members do what they do to save lives and property.”