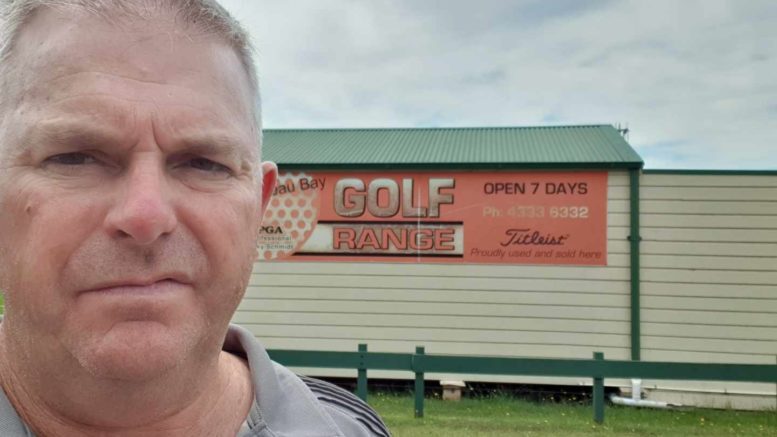 Ricky Schmidt has run the golf range for 12 years

The owner of the Bateau Bay Golf Range who has been trying to renew a lease with Central Coast Council since 2015 says he has finally been told he has to face a tender process.

It is the latest twist in a long-running wall of silence from Council that has left him without security of tenure.

Owner of the Bateau Bay business, Ricky Schmidt and his wife Renee, have run the golf range for 12 years.
A former golf pro, Mr Schmidt took over the lease when he bought the business from his then-employee Job Centre Australia in 2012 when the lease had three years to run.

He said he started to ask questions of Council when the lease needed renewing.

But instead of renewing, Council continued the lease on a month by month basis.

At one stage, Council tried to increase the monthly rent.

Mr Schmidt (photographed) read the original agreement and realised the Council could not increase the rate.

But it could offer him a new lease.

Mr Schmidt said he tried to ring his contact at Council only to be told they had left two years earlier.

Mr Schmidt wanted a new lease so he could justify the investment he was putting into the golf range, which uses land near the sewerage treatment works at Bateau Bay.

Treatment works staff have told him the council will need more of the land within the next ten years or so to enlarge the treatment works which they say is now at 75 per cent capacity, Mr Schmidt said.

But in the meantime, Mr Schmidt wants to stay.

He spoke to yet another council employee in 2019 who seemed to think another lease could be organised.

But then COVID hit and another two years of silence went by.

And now, Mr Schmidt has been told that Council has changed its mind and will put the operation out to tender.

Friend Paul Lynch has taken to Facebook to encourage supporters of the business to write to Council to stop the tender process.

“Please stop spending money on making a public tender, do the right thing as you have promised him since 2015 and re-new his lease,” Mr Lynch said.

“I feel for Ricky and his family and Council have overwhelmed him (with) this backflip and I am only writing this to plea to your commonsense and decency to stop this before many others come to take up the fight,” he said in his post addressed to Administrator Rik Hart.

Central Coast Newspapers has asked Council for a response.