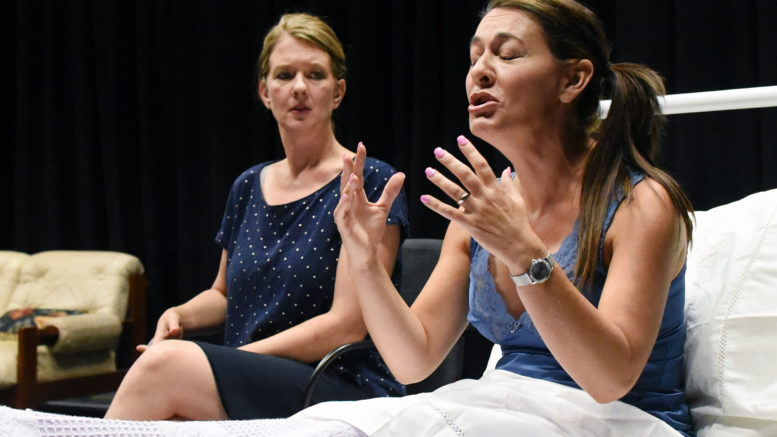 Wyong Drama Group will celebrate its 70th anniversary with a schedule of performances throughout the year that will each open with a special gala night.

The first show this year, which has already been postponed by the pandemic on two occasions, is David Williamson’s Birthrights.

Birthrights opens on February 18 and is one of five shows to hit the boards this year including Nunsense II, The Full Monty and The Sentimental Bloke.

All performances will take place at the Group’s home at the Red Tree Theatre in Tuggerah.

When Helen (Francesca Radice) discovers she is unable to have children, her career-driven sister Claudia (Rebecca Sharples) offers to be the surrogate mother.

The play will be performed nine times and the remainder of the cast includes James Hunter, James Chambers, Sally Bartley and Jacinta-Rose Burley.

Wyong Drama Group has operated for longer than any professional theatre group in Sydney.

The first written record of a drama performance in Wyong was in 1898 – A Complimentary Benefit Concert to The Rev. King Brown in Wyong School of Arts.

However, the current group began as the Wyong Dramatic Group (WDG) in 1952 with the three-act play, “Charity Begins”, directed by Geoff Cox and performed at The Astra Theatre which was demolished in 1973.

By 1955 the group boasted its own hall, called The Youth Hall, where the courthouse is situated today. In 1957, the group changed its name to Wyong Drama Group.

In 1965 the new Memorial Hall opened with the Group’s first performance in the hall – Murder Mistaken.

The Wyong Youth Hall remained the Group’s rehearsal hall until it was demolished in 1974.

They then moved to the Green Room, at the back of the Memorial Hall, which was purpose built as a permanent home for Wyong Drama Group.

When the Memorial Hall was demolished in 2014 to make way for the Art House, WDG had a temporary home at the Wyong Grove Public School which had previously closed.

From November 2014 to November 2019 performances took place at The Grove and The Art House.

In 2020, the pandemic struck and caused the postponement of all scheduled shows for that year.

Pollyanna Forshaw, well-known across the Central Coast for her theatrical achievements, is the longest continually serving member, having clocked up 48 years.

Pollyanna was last seen as Florence Foster-Jenkins in Glorious, WDG’s first show in its new home, the Red Tree Theatre, in March 2021.

Birthrights was scheduled to open at the Red Tree in early August 2021 but the extended lockdown saw it postponed three times (requiring replacement of the lead role) until February 2022.

WDG celebrates its 70th anniversary having staged approximately 300 productions in that time.

Opening night for each 2022 productions will be a gala night which includes a free drink and canapes for patrons prior to curtain up.

Meanwhile, a members’ big birthday party is planned for September 24 at the Red Tree Theatre.

The Red Tree Theatre is located at 160-162 Pacific Highway, Tuggerah.