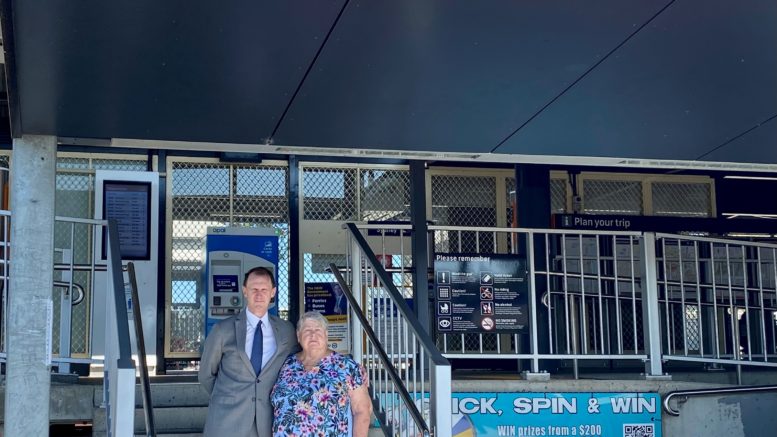 A Tuggerah woman who has campaigned for the last five years to get lifts installed at the Tuggerah railway station is calling on Transport NSW to honour its promise to commence building work this year.

Josephine Johnston, who has lived in Tuggerah for 20 years, and on the Coast since 1973, has led a campaign for the installation of lifts at the station which is currently only accessible via three ramps.

The issue of the lifts has been an ongoing saga since 2011 when then Transport Minister, Gladys Berejiklian, cancelled a proposed lift upgrade allegedly without reason.

In June 2019, following years of inaction, Member for the Entrance David Mehan requested that NSW Transport firmly commit to an upgrade at the station.

A response from Parliamentary Secretary for Transport and Roads, Eleni Petinos MP, at the time revealed that the provision of lifts at Tuggerah Station was in the early planning phase.

“Subject to community consultation and planning approval, construction work will commence in 2021,” she said.

Meanwhile, a $34M upgrade at Tuggerah railway station was announced in the 2020-21 NSW Budget.

David Mehan thanked his constituents who had long campaigned for better accessibility at one of Central Coast’s busiest stations, however, 2021 passed without the arrival of the lifts.

Ms Johnston has since requested further information for Transport NSW and was told that site inspections were completed in 2020 and that building would commence in 2022.

Johnston, 75, Mehan and residents are disappointed that works have not commenced, and the NSW Government is yet to release any plans for community consultation.

“I saw David on Tuesday and told him I’m just not sure about it.

“I don’t want us to be forgotten.

“I hope they stick to the plan, but I am struggling to believe it will happen,” she said.

Lifts at Tuggerah Station was a key community concern in the lead up to the 2019 election. “Central Coast people have every right to be concerned that the project may not be delivered at all now given the resignation from Parliament of the Minister and Premier who made the promise,” said Mehan.