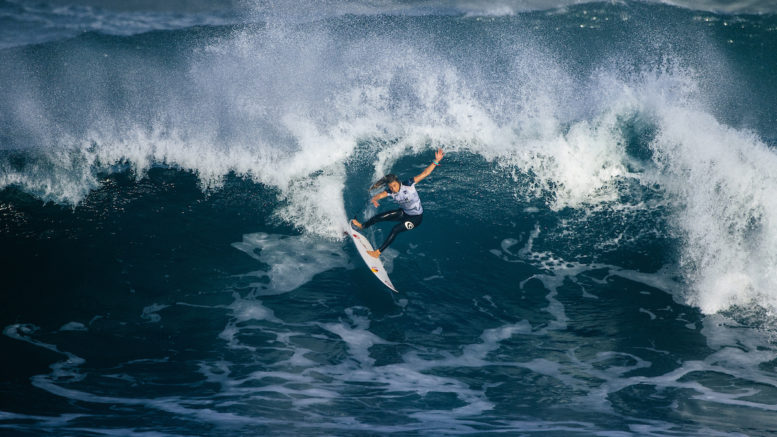 HALEIWA, HAWAII - FEBRUARY 17: Molly Picklum of Australia surfs in Heat 1 of the Opening Round at the Hurley Pro Sunset Beach on February 17, 2022 in Haleiwa, Hawaii. (Photo by Brent Bielmann/World Surf League)

Shelly Beach surfer, Molly Picklum, made it as far as the Quarter Finals at the Championship Tour (CT) Stop 2, Sunset Beach, on Thursday, February 17 and added a new career highlight by knocking out defending champion Carissa Moore.

The opening day of the Women’s competition packed in six Round One heats, two Elimination Rounds, the Round of 16 and Quarter Finals, thanks to a side-offshore wind raising up to 12 foot waves in the morning, evening out to a height of 10 feet in the afternoon.

Picklum and her dedicated rail game excelled in these conditions, beginning with a Round One win against Hawaiian, Gabriela Bryan, and Frenchwoman, Johanne Defay.

This was a welcome taste of competitive revenge for Picklum, who was recently knocked out of the CT Stop 1 at Banzai Pipeline by Defay.

At Sunset, the tables turned and Molly advanced to the Round of 16 to face the 2021 CT champion, Carissa Moore, surfing on her home break.

In this contest between the top and bottom seeds on tour, the lead changed hands multiple times as both surfers improved their scores over 30 minutes.

With five minutes left in the heat, Picklum established a comfortable lead over Moore with her best wave of the heat, scored at 6.83 with two forehand turns cutting deep across the face of the powerful swell.

“It’s such an honor to be in the lineup with her,” said Picklum.

“I think you have to give your all to beat someone like Carissa, so I’m super excited to come out on top.

“I think it’s great to be a rookie because we have nothing to lose.

“We deserve to be here, and to surf along with them, so it’s just exciting.”

Picklum advanced into a Quarter Final contest against Brisa Hennessy, and despite establishing an early lead, fell behind to the eventual event winner from Costa Rica.

Picklum started strong with her best wave of the day, awarded at 7.33,but Hennessy came back with a wave scored at 8.66 to take out the heat.

Picklum’s performance has advanced her into the top 10 surfers on tou.

Eight more events are scheduled leading up to the finals in September.