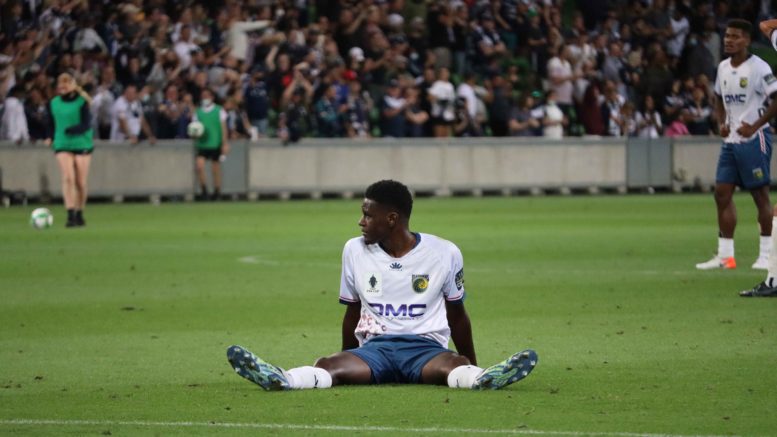 It was an expectantly difficult challenge at AAMI Park faced headlong by the visiting team in their first trip out of New South Wales this season.

For the first half, the Mariners maintained their strong defensive structure to keep Victory away from the net, continuing their record of only one conceded (penalty) goal throughout this year’s FFA run.

On multiple occasions Mariners left back Jacob Farrell stepped up in the biggest game of his early career to deny Victory right wing Marco Rojas from advancing one-on-one against Mark Birighitti in goal, making decisive – yet dangerous – slide tackles in the penalty area and discontinuing the attack.

Always solid was Kye Rowles in the centre back position, returned from the Socceroos camp in Oman to reform his team’s defensive line.

Trouble was experienced at the other end of the field, where the team struggled to find clear pathways toward testing Victory keeper, Ivan Kelava.

By half time, the game was delicately balanced, deadlocked at 0-0, with only possibility waiting in the second half.

The Melbourne hosts were quick to take command of play in the second half, denying the Mariners’ consistency in possession and forcing them into defensive exertions.

Underneath this tumult in general play, the Mariners displayed a determined resistance, yet the first crack showed with a precariously positioned free kick rewarded to Victory on the edge of the penalty area.

In the 70th minute, this was the breakthrough moment for Melbourne, and Jason Davidson and his left boot took full advantage of the opportune, 45-degree angle on goal.

The strike caught Birighitti off guard – he was busy minding his left of goal, leaving him unable to react in time for the shot curling into the right-hand side of the net.

With a deficit established, the Mariners were forced into a stronger attacking effort yet missed a clinical final touch in the hard-earned ultimate moment in front of goal.

The all-out attacking restructure left the team vulnerable in defence and Victory capitalised on this in injury time with a fast-paced counter-punch, leading to Christopher Ikonomidis striking the ball hard across goal to net his team’s second.

To the unrewarded credit of the visitors, a go-for-broke response resulted in a quick return goal from Oliver Bozanic on the half volley with a dipping lob beyond the grasp of Kelava – making good on the Mariners’ mantra: Won’t Back Down.

In the end, this final hope was not enough to force the game into extra time, with the end-game whistle quickly following to reward Victory the renamed, Australia Cup.

In consolation, the ‘Mark Viduka’ Best Player Award was bestowed onto Rowles for his resilient defensive effort against the dominating home team, an award he shares with Victory’s Jake Brimmer.

The Mariners may be grieved to have come so far in the FFA Cup only to end up second best, yet their struggles to reach this final showed a growing capability within Head Coach Nick Montgomery’s squad that will continue to benefit them for the remaining A-League season.

“I thought the boys were fantastic tonight (and) I’m super proud of them,” he said.

“Obviously Birighitti didn’t have much to do and it was a fantastic free kick to break the deadlock.

“Then from that moment on the game changes a bit, we had to risk, we had a couple of decent chances, we copped a sloppy second goal.

“All credit to the boys, I thought they showed great fight to keep going, to pull themselves back and then we just ran out of injury time unfortunately.

“We’ll learn from the experience, move on, dust ourselves down, travel back to the Central Coast and we’ve got a massive period of games coming up, the boys will take a lot from that.

“It hurts now, and the boys are hurting in there but I’ve just told them, ‘put your heads up, be super proud.'”