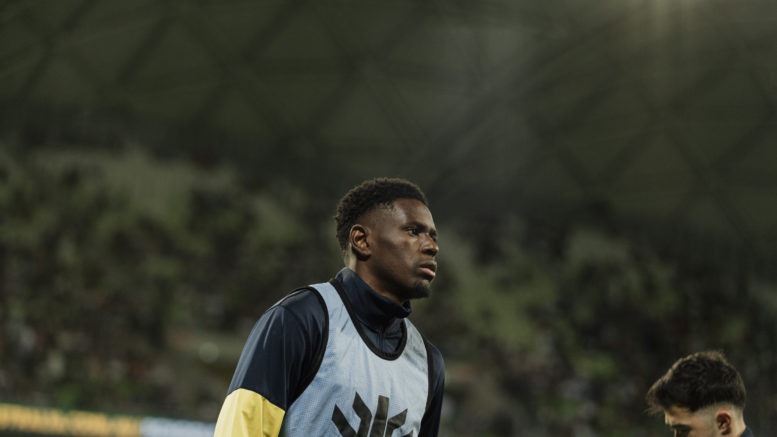 Improvements in the performance of the Central Coast Mariners’ squad have, again, gone unrewarded following a 2-1 loss away against Adelaide United on Saturday, February 26.

The visitors earned a one-goal lead at half time off the back of rising confidence from newfound goal scorer, Beni N’Kololo,

Conceding a late goal in second-half injury time goal is, however, becoming a dangerous pattern in the Mariners camp.

Both sides had clear chances at goal but most lacked a clinical touch or were saved by an astute goalkeeping feat.

A penalty was awarded against Mariners’ left back, Jacob Farrell for a slight yet undisputed challenge on Lachlan Brook’s left boot in the 23rd minute.

Ten minutes later, the Mariners found the opening goal thanks to the bridging of the English channel between Jason Cummings and Beni N’Kololo.

A misfired clearance from Brook launched the ball high into the air above the Mariners’ attacking third, adeptly controlled with a turn on the first touch by Cummings, who followed with a simple leading pass onto N’Kololo’s right side.

The French striker made it two goals in two games with his second touch, firing the ball low and hard across goal to undermine Joe Gauci and score for the visitors.

The away side lead was maintained into the second half, but soon fell to an opportunistic equaliser, scored by Hiroshi Ibusuki at close quarters after a failed defensive corner clearance by the Mariners.

The final 30 minutes included more opportunities for both teams but the match was decided in the second minute of injury time by Adelaide’s Nestory Irankunda and his first-touch thunderstrike.

“The pattern of Adelaide coming back late, scoring late, and us conceding late, that’s probably a good matchup, but we’ve got to fix it,” said Head Coach Nick Montgomery in the post-match press conference.

“If we’d got a point tonight (with a draw), I’d probably have been a little bit disappointed.

“I thought we had some real clean chances to win the game, but all credit to Adelaide, they kept going and take three points, and we go back to the Central Coast now after ten days away.”

Ultimately, it was an unsuccessful trip down south for the boys in yellow with nine points dropped in three games.

One positive outcome has been the emergence of N’Kololo onto the scoresheets, a development Monty is only natural as the international signing acclimatises to the A-League whilst overcoming difficulties.

“Beni can play left and right (and) he’s been superb,” continued Monty.

“First game the season against the Jets, he was probably the best player in the round for me then he got a bad ankle injury in that game from a shocking tackle in the box.

“After that, he missed three or four weeks, then obviously we had the COVID (infections), then he lacked a little bit of confidence.

“But you can see the goal against Melbourne City and the goal tonight, so you know he is a top young player and young players need confidence.”

Now Monty and his young team will look to follow in the footsteps of N’Kololo’s growing confidence, their next opportunity being against Brisbane Roar, scheduled for Saturday March 5 at Central Coast Stadium.