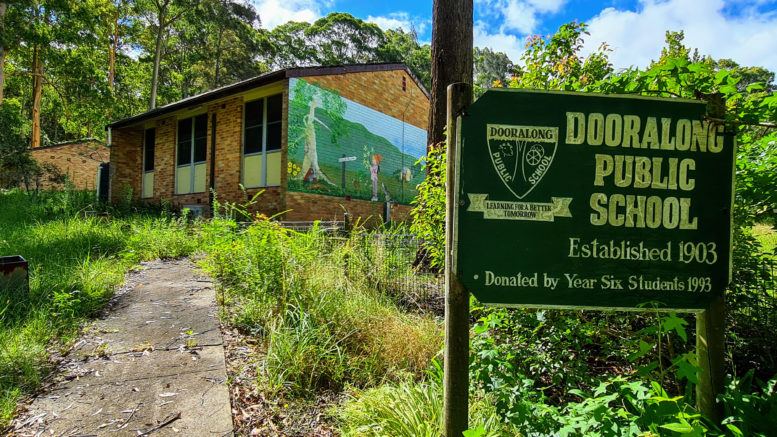 A real estate sales listing has confirmed that the State Government has put the former Dooralong Public School site, which has been left abandoned since closure in 2011, under the hammer.

The auction for the four-hectare site at 1046 Dooralong Road, Dooralong is pitched as an “opportunity for the astute” by sales agents Capital One.

Former Principals David Harris (Member for Wyong and Shadow Minister for the Central Coast) and Paul Maish have expressed outrage that the site, considered of historic significance to the community, is being primed for sale and that the State Government failed to engage the community prior to a decision being made.

“I have been contacted by upset community members in regard to this sell off of a community asset.

““The NSW Government has ambushed the community because there has been no consultation on potential alternate community use,” said Harris.

The school is cited on the Wyong Local Environment Plan as having local heritage significance.

“(It) would impact any future proposed changes to the existing heritage buildings,” said an Education Department spokesperson in January.

In 2018, Central Coast Council quashed an Education Department proposal to rezone the school site to sell it for future “village” subdivision because it would diminish the local prominence and heritage value of the school buildings.

Maish doubts that the heritage buildings will remain after the sell-off takes place.

“What concerns me more than anything is that two old classrooms one the original from 1903 and the other (1914) will be demolished when the site is sold and developed,” he said.

Harris, who was Principal at the school from 1993 to 1999 plans to move a motion condemning the sale and is calling on the NSW Government to consult the community of Dooralong.

“My office contacted the Department of Education for information, but they had no knowledge indicating that the sale had been handed over to Land and Property Management which means there is no guarantee that a single cent from a sale would go back to local schools,” said Harris.

Dooralong Public School opened on August 19, 1903, with 15 pupils and enrolments steadily grew with a tradition of high academic and sporting results.

Maish said that aside from the Hall, the school is the only thing that really marks Dooralong.

An online only auction for the site takes place on Wednesday 9 March.