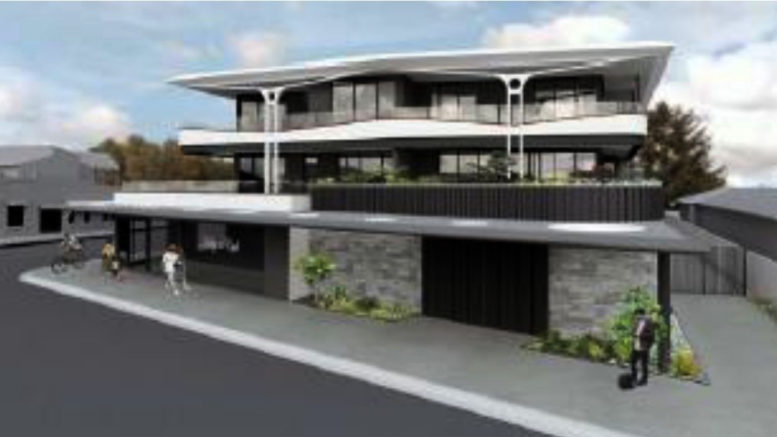 An artist's impression of the proposed mixed-use development in Ettalong.

The proponent of a mixed-use development in Ettalong that was refused by the Local Planning Panel (LPP) in October has resubmitted documents to seek a review of the panel’s decision.

Plans to construct a mixed-use development block complete with serviced apartments in Ettalong Beach were refused by the LPP on October 28.

The proposed development on 302-308 Ocean View Rd would include the partial demolition of the existing commercial building, demolition of the existing residential dwelling (fronting the beachfront reserve) and construction of a three-storey mixed-use development containing ground floor retail space, ground floor vehicle parking and 12 residential units.

In a report to the LPP Council recommended the panel reject the application as the development was not in the public interest.

Wales & Associates Urban Design Partners resubmitted the Review under Section 8.2 of the Environmental Planning and Assessment Act (EP&A) on January 19.

In their assessment, the LPP said the proposal did not comply with the maximum Height of Building provisions of Clause 4.3 of the Gosford Local Environmental Plan 2014, with the height of the building contributing to an unsympathetic development form that was not appropriate in the context of directly adjoining and nearby development sites.

The applicant said the plans had now been amended to address the requirements of the Apartment Design Guide specifically in relation to the building separation to the western properties.

“The proposed building has now been set back six metres from the western boundary,” the applicant said.

“The plan amendments have resulted in a lesser bulk and scale when viewed from Ocean View Rd.”

The LPP also noted the original proposal would “adversely impact on the character and amenity of the locality and did not include a sufficiently articulated and modulated design on the south and west elevations… that rely heavily upon screened windows to achieve appropriate amenity outcomes”.

“The proposed building has now been set back six metres from the western boundary,” the applicant said.

“The plan amendments have resulted in a lesser bulk and scale when viewed from Ocean View Rd.

“These amendments have resulted in a design that better integrates with the existing streetscape.”

A full copy of the amended documents are available on Council’s ePlanning Portal.