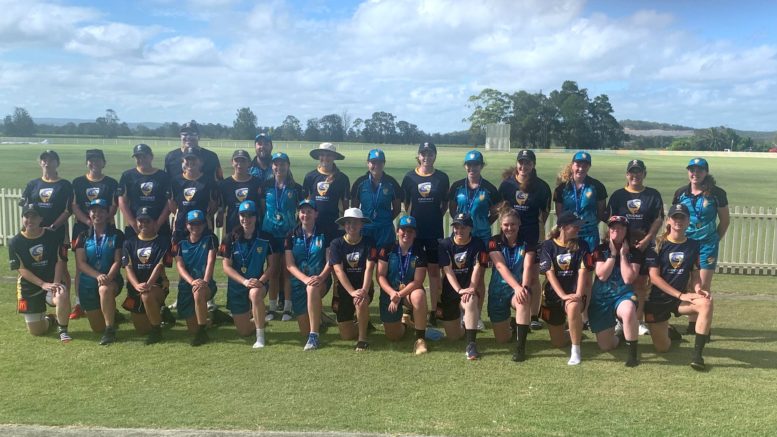 The Central Coast has finished runner up in the McDonalds Country Cricket NSW U19 Female Country Championships which concluded in Raymond Terrace, on Friday, January 7.

The result, which saw them lose the final to a strong ACT Southern Districts, side is believed to be the best result by a Central Coast side and was remarkable given their massive loss to Riverina on Day 1.

Entering the final day the Central Coast had to win their match against Western Zone and rely on both Greater Illawarra and Riverina to lose to make the final.

Central Coast did their part defeating Western by 36 runs led by excellent bowling performances from Grace Dignam 5/8 and Piper Hooke 4/9.

With this result accomplished their finals berth was dependent on the two other results which both went their way resulting in the Central Coast entering the final against the undefeated ACT Southern Districts.

Central Coast won the toss in the final and elected to bat and through the agency of Emily Cross 25 and Tara French 19 reached 5/82 off their 20 overs, a total which was considered to be acceptable but would require early wickets.

Unfortunately those wickets did not eventuate and ACT Southern Districts were able to pass the total for the loss of three wickets with14 balls to spare.

Dignam was again the most successful bowler with 2/23.

Overall a fantastic performance and one the players and coaches should be very pleased with, according to Central Coast Zone Administrator, Garry Burkinshaw.

“On another promising note, Piper Hooke finished the carnival as equal leading wicket taker with 10 wickets at an average of 3.8,” Burkinshaw said.

The Entrance was represented by Olivia Field and Wyong by Eliza Thompson.

Central Coast ended a disappointing Bradman Cup campaign with a 142 run loss to Greater Illawarra in Newcastle on January 7.

After losing the toss and having to bowl first the Central Coast boys chased leather for 50 overs as Greater Illawarra amassed 5/343.

In replay the Central Coast were never in the hunt and despite 57 from Tom Alderson, 39 from Toohey and 26 not out from Rayden Gomez they were dismissed for 201.

Central Coast finished the carnival in seventh position with two wins and five losses from their seven games.